Analysis: US oil and gas rig count falls 34 to 398 as Permian collapse extends 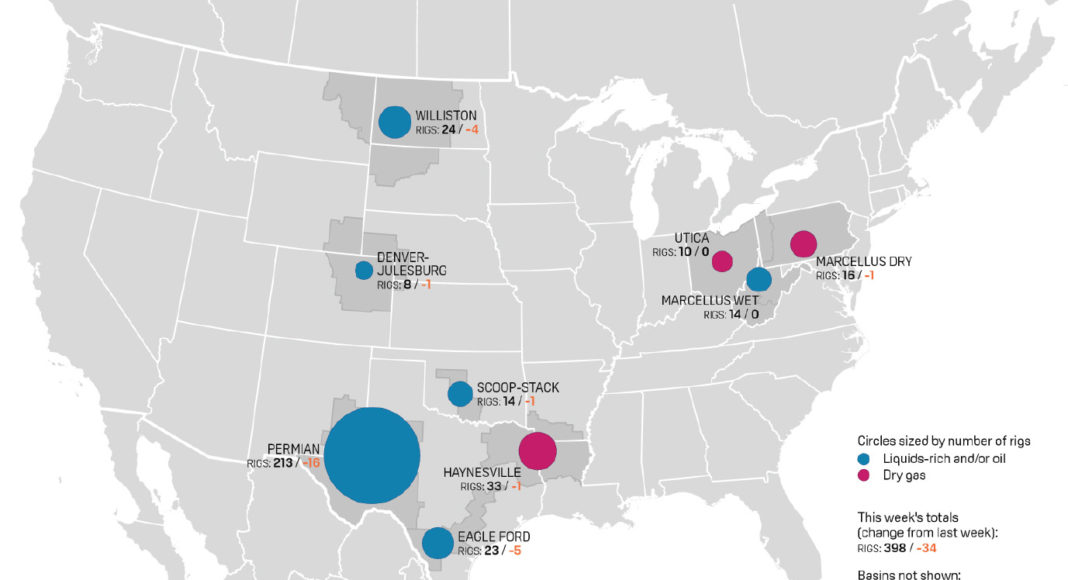 (Platts) The US oil and gas rig count fell 34 to a total of 398 in the week ended May 6, as Permian basin drilling activity continued to decline, rig data provider Enervus said Thursday.

Oil rigs again led the decline, falling 29 on the week to 286, while the number of gas-focused rigs slipped 5 to 112.

Total US drilling activity has declined nearly 53% from its recent peak during the week-ended March 4 and is now 63% behind year-ago levels.

The decline in oil-focused drilling operations has been sharp, with the nationwide rig count down 404 from 838 on March 4, a 59% decline. Rig counts in the five major oil-focused basins—the Permian, SCOOP-STACK, Eagle Ford, Williston, and Denver-Julesburg—have all declined by at least 50% from early March.

Permian basin operators led the pullback in drilling last week, with the rig count there falling 16 to 213, while the Eagle Ford rig count shrank by 5 to 23.

The 16-rig pullback in the Permian was the smallest weekly slide since mid-March and the second straight week of slowing declines.

The slowdown in free-falling rig counts comes as WTI prices have rallied back into the mid-$20/b range this week, after settling in negative territory on April 20.

Still, drilling activity in the Permian is now down nearly 54% from year ago levels, while Eagle Ford operators have idled 72% of their platforms over the same period.

In the Williston basin, the active rig count fell by four to 24 last week, and operators idled one rig each in the Denver-Julesburg and SCOOP-STACK plays putting rig counts there down to 8 and 14, respectively.

Drilling operations in major gas-focused plays also declined last week, with rig counts in the Haynesville and Marcellus basins each falling one to 33 and 30, respectively. The Utica basin rig count was unchanged on the week at 10, where it has held since March 4.

Upstream capex reductions and a sharp pullback in drilling activity in recent weeks now appears to be contributing to accelerating output declines.

Outside of a one-week dip in mid-July, US crude output was last lower in February 2019.

At least 37 US-based oil companies have slashed capex guidance by an aggregate $38 billion, an average cut of 33%, as of Tuesday, S&P Global Platts Analytics data shows. In total, US upstream players have shut in at least 1.335 million b/d of output, according to Platts Analytics data.

Marathon Oil is “hitting the pause button” on its operations in the Permian Basin’s Delaware Basin and Oklahoma in favor of the Eagle Ford and Bakken Shale plays as part of its significantly reduced 2020 capital plan, the company said Thursday.

Hess announced Thursday it plans to reduce its Bakken rig count to one by the end of May and expects net Bakken production to average 175,000 barrels of oil equivalent/day, down from 190,000 boe/d in the first quarter of 2020.