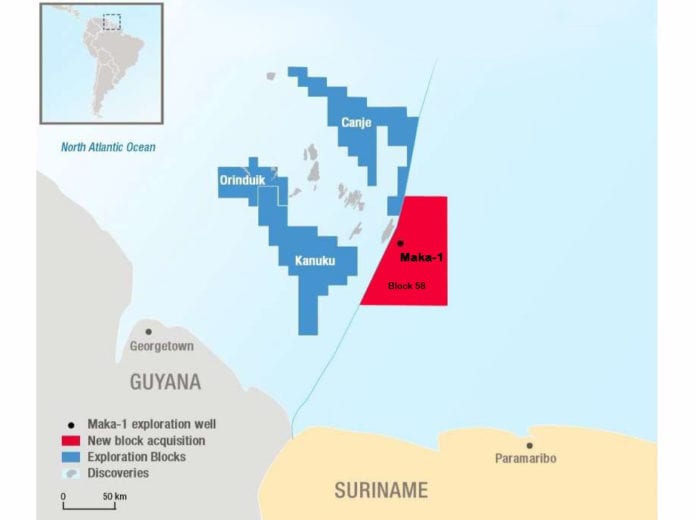 Apache and Total, 50-50 partners in Suriname’s Block 58, said their next well – Sapakara West-1 – will test the same-aged upper Cretaceous intervals that brought them success at Maka Central-1, in a separate and distinct stratigraphic feature.

Sapakara is roughly 12 miles (19 km) southeast of Maka Central-1 and will help to determine the quality to be expected in Suriname’s most attractive plays.  The Liza crude in Guyana stands at 31-32 degrees API whilst Maka tilts towards densities potentially higher than 40 degrees.

As the explorers gun for more oil in the Block adjoining Guyana’s Stabroek where US oil major ExxonMobil has made a record 15 discoveries in less than 5 years, the speed with which that company moved from first discovery to production could be an example to emulate for Apache and Total.

In an Op-Ed published on Oil Price on Saturday, Viktor Katona, Group Physical Trader at MOL Group and Expert at the Russian International Affairs Council, said the dramatic jump in Apache’s stock within a day of the Maka discovery points to optimism on the market “boosted by the speed with which ExxonMobil managed to launch Liza.”

President of Upstream Oil and Gas at ExxonMobil, Liam Mallon, said as recently as Friday in Georgetown, Guyana’s capital, that had the company and its co-venturers Hess and CNOOC stuck to average industry performance, the first development (Liza Phase 1) would have taken 9 years. Instead, ExxonMobil was able to fast track production to less than 5 years from discovery, both safely and under budget.

Katona said the Maka discovery will become one of the main upstream stories of 2020, bringing Suriname onto the international oil map, potentially spawning a new race for the Dutch-speaking country’s still unallotted license blocks and concurrently boosting the investment potential of Guyana.