OilNOWLatest News and Information from the Oil and Gas sector in Guyana
More
FeaturedNewsRegional
Updated: January 31, 2018 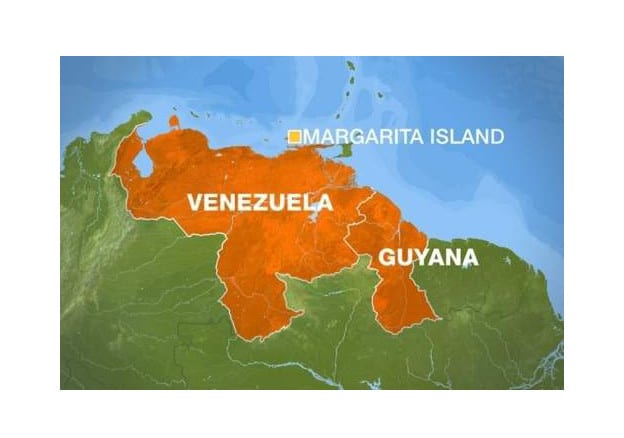 A bitter border controversy between oil giant Venezuela and its eastern neighbour, Guyana, has been referred to the International Court of Justice (ICJ) by United Nation’s Secretary General, Antonio Guterres.

The development obtains since the two countries were unable to come to an amicable agreement over Venezuela’s objection to an 1899 Arbitral Tribunal Award that had finalized the borders between the two countries.

Tempers have flared in recent years as Guyana has pushed to develop crude discovered in its offshore basin – waters contested by the Bolivarian Republic of Venezuela. The territorial claim led to the now exhausted ‘UN Good Offices’ mechanism; a process that has since failed.

The Guyanese Government had, in anticipation of the announcement by the UN Secretary General, deposited into a Special Account at the Bank of Guyana US$18M, set aside as legal fees.

Guyana’s Ministry of Foreign Affairs today in welcoming the decision taken by the UN Secretary General said the country “…has always held the view that the ICJ is the appropriate forum for the peaceful and definitive settlement of the controversy, and is pleased that that view has prevailed under the process developed by both Secretary General Ban Ki Moon and Secretary General Antonio Guterres.”

Spokesman for the Secretary-General, Stéphane Dujarric, in making the announcement said, “the Secretary-General has carefully analyzed developments in 2017 in the Good Offices process and has concluded that significant progress has not been made towards the full agreement for the solution of the controversy.”

The Spokesperson indicated that the Secretary-General has fulfilled the responsibility which had fallen to him within the framework set by his predecessor in December 2016, and has chosen the International Court of Justice as the means to the solution of the controversy.

According to Mr. Dujarric, “The Secretary-General, in accordance with the principles of the United Nations, remains committed to these States as they seek to overcome their differences regarding this border dispute.”

According to Guyana’s Ministry of Foreign Affairs – headed by Vice President, Car Greenidge – Guyana will not allow factors extraneous to the controversy to influence its referral to the Court; but it will continue the advancement of peaceful relations with Venezuela whose people are the brothers and sisters of Guyanese.

“In this context, Guyana acknowledges the Secretary General’s suggestions for the immediate future,” the Ministry said.

It was observed by the Ministry that, “Guyana has stood firm against Venezuela’s attempt to re-open a territorial boundary settled and recognised for half a century before its independence, and done so despite the manifest unequal strengths between the two countries, is to our national credit…Guyana, as one of the world’s small developing countries, is pleased that its reliance on the rule of law internationally has been the underpinning of its national sovereignty.”

LAW OF THE SEA

Venezuela’s claim to more than two-thirds of Guyana’s territory has escalated over the years, especially with the oil exploration activities and recent world class discoveries offshore Guyana. A large swath of Guyana’s maritime territory has been claimed by Venezuela in the absence of a formal maritime delimitation.

Venezuelan Leader, Nicolas Maduro in 2015 issued a decree creating the “Atlantic coast of Venezuela,” which extended that country’s claim to Guyana’s territorial waters in the Atlantic Ocean off the Essequibo region.

This followed on earlier more forceful actions on the part of the Venezuelan military which in 2013 entered the marine space – recognized as Guyana’s sovereign territory but disputed by Venezuela -and seized a US operated oil ship; the Teknik Perdana.

The vessel was detained by the Venezuelan military and taken to nearby Margarita Island.

The oil exploration vessel was at the time conducting surveys for Texas-based oil company Andarko Petreloeum.

Caracas had accused the 36 member crew of operating illegally in its territory – a position vehemently disputed by the Guyanese administration.

Following the exploration activities by us oil major ExxonMobil which has already led to the discovery of some 3.2 billion recoverable barrels of oil, rhetoric from its western neighbour amplified.

The longstanding border controversy between Guyana and Venezuela arose as a result of Venezuela’s contention that the Arbitral Award of 1899 outlining the frontier between British Guiana and Venezuela is null and void.

In the Geneva Agreement of 1966, Guyana and Venezuela conferred upon the Secretary-General the power and responsibility to choose a means of peaceful settlement from among those contemplated in Article 33 of the Charter of the United Nations.

Former Secretary-General Ban Ki-moon communicated to the parties on December 15, 2016 a framework for the resolution of the border controversy based on his conclusions on what would constitute the most appropriate next steps.

At the time the Secretary General had concluded that the Good Offices Process, which had been conducted since 1990, would continue for one final year, until the end of 2017, with a strengthened mandate of mediation.

He had also reached the conclusion that if, by the end of 2017, his successor, Secretary-General Guterres, concluded that significant progress had not been made towards the full agreement for the solution of the controversy, he would choose the ICJ as the next means of settlement, unless the Governments of Guyana and Venezuela jointly requested that he refrain from doing so.

In early 2017, Secretary-General Guterres had appointed a Personal Representative, Mr. Dag Halvor Nylander, who engaged in intensive high-level efforts to seek a negotiated settlement to the controversy.

Facebook
Twitter
Pinterest
WhatsApp
Linkedin
Email
Telegram
Previous articleExxonMobil to ramp up Permian production to 600,000 barrels
Next articleThis oil major has a supercomputer the size of a soccer field