OilNOWLatest News and Information from the Oil and Gas sector in Guyana
More
FeaturedNewsProduction
Updated: May 1, 2017 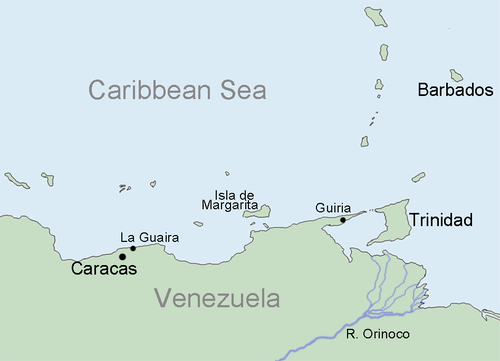 An oil spill which occurred at Trinidad and Tobago’s state oil company Petrotrin on April 23 has now spread to the Venezuelan maritime boundary.

The country’s Ministry of Energy says it is tracking the trajectory of the oil spill through computer based models of aerial and maritime surveys as the spill is moving in a westerly direction towards the border, reports the Trinidad Express.

Venezuelan authorities have been alerted and the country confirmed oil sightings in the vicinity of Guiria, on Sunday. Venezuela is now treating with the oil and the impacted areas.

On April 23, over 300 barrels of the black crude leaked into the Gulf of Paria from Petrotrin’s Pointe-a-Pierre refinery after storage tank #70 ruptured.

The company has come in for heavy criticism by Trinidad and Tobago’s former energy minister, Kevin Ramnarine, who posited that if, for example, the tank was 20% full it would contain a volume of 30,000 barrels of fuel oil. “Given the location of the rupture (at the base of the tank) most of the contents of the tank would have been spilled. How much of this fuel oil entered the sea and how much fuel oil was contained in the refinery?” Mr. Ramnarine asked, in a comment he made on Facebook on April 28.

Petrotrin must also say, he added, why the tender process for the installation of bund walls was stopped.

Bunding, also called a bund wall, is a constructed retaining wall around storage where potentially polluting substances are handled, processed or stored.

The country’s energy ministry said since the incident, a National Oil Spill Contingency Plan (NOSCP) was activated to a Tier 2 level, which allowed for maximum use of in-country resources on April 24.

Daily monitoring and reporting on oil spill response efforts both in Trinidad &Tobago and in Venezuela will continue in accordance with established protocols and the public will be advised on any further developments accordingly, the ministry said.