Canada leads global list of those in trouble, set to see above 1.1 million bpd halt

The COVID-19 pandemic has devastated global oil demand triggering the start of shut-ins at operations around the world, led by Canada.

A Rystad Energy analysis shows that Canada is the oil producer most affected so far, with the damage estimated to reach above 1.1 million barrels per day (bpd) in shut-in production in the second quarter of 2020.

Thus far, Canada is estimated to have shut-in oil production of at least 325,000 bpd, followed by Iraq (300,000 bpd), Venezuela (235,000 bpd) and Brazil (200,000 bpd). Although the US is also likely to be shutting-in hundreds of thousands of barrels of production as well, numbers are not yet official and are not included in Rystad Energy’s estimates.

“Due to the severity of demand destruction in North America in April and May, we estimate that shuttered oil sands and heavy oil curtailments in Western Canada could exceed 1.1 million barrels per day in the second quarter of 2020, with additional near-term downside risk,“ says Rystad Energy’s senior analyst Thomas Liles.

The Norway-based energy research and business intelligence company said its curtailment forecasts for the rest of the year have increased to 513,000 bpd for the third quarter and 293,000 bpd for the fourth quarter. 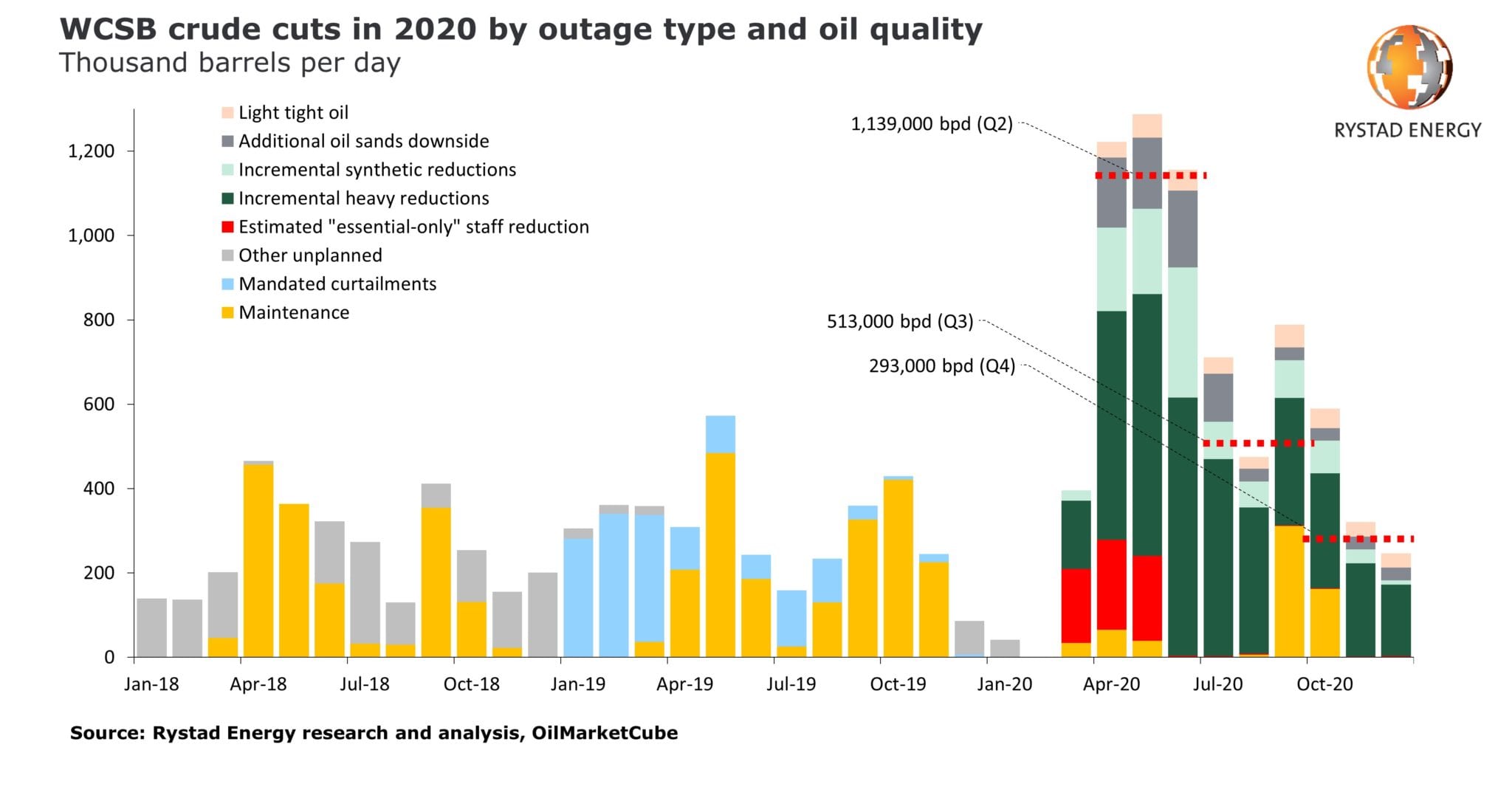 In March Rystad Energy predicted that Western Canadian crude storage was likely to approach maximum capacity by the end of the month at then-current production rates. Movements in benchmark Canadian oil prices since April 1 appear to corroborate mounting pressure on in-basin storage capacity, with lighter Canadian benchmark prices decoupling from WTI over the past week.

Murmurings from midstream players have underscored the strain on storage capacity and the production cuts this has already brought. Recent communication from upstream players has also highlighted the storage conundrum and all but assured deeper near-term cuts.

“In any case, Western Canada’s chronic lack of storage capacity was guaranteed to emerge as a key constraint on upstream volumes in a low-demand environment. As with the recent decoupling in light benchmark prices, the experience for Canadian producers will probably remain “decoupled” from any positive surprises from the OPEC+ meeting on 9 April or any other potentially positive news surrounding global near-term supply developments,” Liles concludes.

Over 15 Canadian companies looking to partner with Guyana for oil...