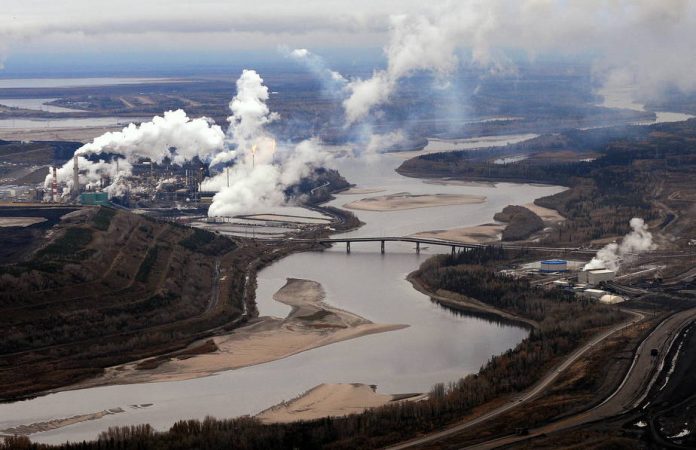 (Bloomberg) Canada’s oil sector is divided over whether to force a temporary cut to production, with some major producers pushing the controversial idea in a bid to ease a supply glut and halt a steep plunge in prices, according to seven people familiar with the matter.

Executives from Canadian Natural Resources Ltd. and Nexen Energy ULC are among those who made the pitch to Alberta’s premier last month, the people said, speaking on condition of anonymity as the meeting was private. Cenovus Energy Inc. is also publicly advocating for a forced cut.

The producers called on Rachel Notley to invoke a provincial government power to force “curtailment,” the people said, at a time when Canadian heavy crude is selling for a near-record discount from U.S. benchmark prices, costing Alberta billions. Some called for a temporary 10 percent cut, or about 380,000 barrels per day, until the market stabilizes, the people said.

But the push is opposed by Suncor Energy Inc.; ExxonMobil Corp.’s Canadian unit, Imperial Oil Ltd.; and Husky Energy Inc., the people say. Each has integrated operations, from production to refineries, that cushion the blow and therefore want to let the market sort out the oversupply issue.

Notley’s government has publicly lowered expectations for intervention. She emerged from the meeting calling for the purchase of more oil-hauling rail cars, but didn’t advocate curtailment. The unusual standoff reflects the dire straits most producers are in.

“At the price that Albertans are getting for their oil, no one is making any money whatsoever in the upstream industry. At the same time, number of producers who are integrated with refineries are making windfall profits,” Cenovus Chief Executive Officer Alex Pourbaix told BNN Bloomberg television Wednesday, declining to name names.

Canadian producers are not only being hit by the global plunge in oil prices, but face severe transport bottlenecks that have caused the northern nation’s customary discount to balloon to near record highs. A barrel of Canadian heavy crude was worth $15.75 on Wednesday afternoon.

Pipelines are full and new ones are almost impossible to build thanks to regulatory and political challenges. Storage facilities and rail cars are also at capacity, but the oil keeps on coming. If sustained, the steep discount will cost government coffers billions while kneecapping the oil sector. Peters & Co. estimated last week Alberta could lose at least C$5 billion ($3.78 billion) in royalties if current conditions persist.

“What we’re trying to do is see the government take very moderate action in terms of production levels in order to avoid an economic catastrophe,” Pourbaix said.

On Oct. 22, key industry figures gathered in an old downtown Calgary school now used as an office for the premier. The closed-door meeting was chaired by Notley herself and featured top executives from both upstream and integrated oil producers trying to persuade her of their respective positions.

The gathering was so unusual that Suncor’s representative, Chief Operating Officer Mark Little, began by warning the meeting itself might violate Canadian competition law, if it amounted to price-fixing, three of the people said. Notley said government action was the focus and discussions continued, those people said.

Upstream producers didn’t suggest firm timelines, but some envision a 10 percent cut to production for anywhere from three to six months, the people said. The government power they’re asking Notley to exercise was last used under Premier Peter Lougheed a generation ago.

They argue the temporary cut would allow a backlog to be processed and potentially trigger a recovery in prices. Their integrated opponents urged Notley to let the market function and also warned that intervening could jeopardize the new North American trade deal with the U.S. and Mexico, given President Donald Trump’s criticism of the Organization of Petroleum Exporting Countries.

Suncor confirmed that Little was in attendance but wouldn’t discuss specifics of what was said in the meeting. “Government intervention in a market sends the wrong signal to the investment community about doing business in Canada,” spokeswoman Sneh Seetal said in a phone interview Wednesday.

A Husky spokeswoman referred to comments made by its chief executive on a recent conference call. “We think the right answer to these sort of problems are market-based solutions,” Rob Peabody said Oct. 25.

Imperial Oil declined to comment on the specifics of the meeting but also cited recent comments by CEO Richard Kruger, who said Nov. 2 ”our view is you live with the consequences of your decisions in your investments.”

On the intervention side, Cenovus went public with its support for a price cap on Monday and others are now following suit. “As Canadians we are not getting fair value for our resource and action by the government to temporarily reduce production across the oil sands industry is warranted,” Quinn Wilson, North American chief executive officer of CNOOC International Ltd., said on behalf of Nexen.

MEG Energy Corp. and Devon Energy Inc. were also advocating for a temporary cut, the people said. MEG confirmed Wednesday it favors such a move; Devon advocated for a voluntary reductions but stopped short of revealing what it said in the meeting. A spokeswoman for Canadian Natural declined to comment.

Athabasca Oil Corp.’s chief executive was also at the meeting. “This is an unprecedented situation with significant market constraints and there are companies that are profiting from the market conditions,” Rob Broen said in a phone interview late Tuesday. “The government needs to take some action.”

Grant Fagerheim, chief executive at Whitecap Resources Inc., didn’t attend but nevertheless supports cutting production for a fixed period of time — and potentially at different levels. The supply glut is because of growth in heavy oil production from Alberta’s oil sands, he said in a phone interview Wednesday, so those companies should cut more than conventional oil producers like his.

“Who’s paying for all of this? Every single Canadian,” Fagerheim said, blaming the current price crisis on government failure to get pipelines built. “Oil sands growth, without sufficient approved takeaway capacity, has caused the problem.”

Pipeline giants TransCanada Corp. and Enbridge Inc. also sat in on the meeting, the people said, but stayed largely neutral to avoid aggravating one group of clients over another. Both companies declined to comment.

The scene, though, was bizarre to some in the room. Calgary is the heart of Canada’s conservative movement and Alberta considers itself a champion of free-market economics. The province elected the left-leaning New Democratic Party in something of a fluke of circumstance in 2015, and the notion that oil executives would be pressing a leftist premier to cap their production would have been unheard of only a few years ago.

For now, Notley’s government is downplaying the controversy. She does have the power to cut production but “that bare-bones legal authority” hails from a different era, according Mike McKinnon, a spokesman for her energy minister.

“Modern-day realities such as free trade agreements and integrated oil sands operations would make it far more complicated to simply institute a quota system,” he said in a statement. “Any decision would need be made thoughtfully and respect the orderly regulation of today’s oil and gas sector.”