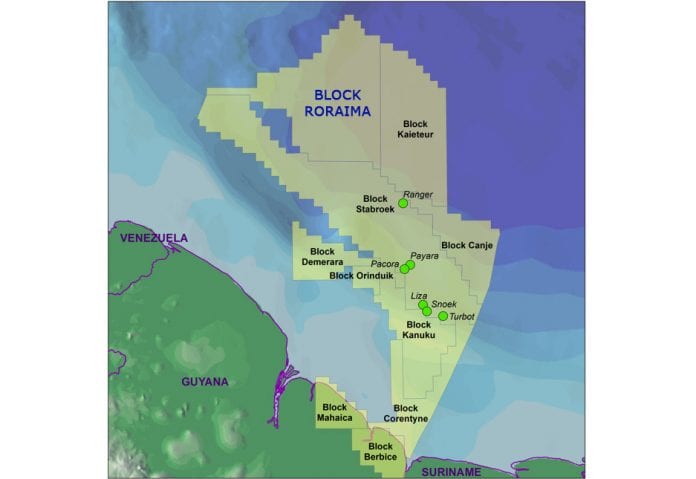 Chevron’s announcement on Friday that it was acquiring Anadarko in a US$50 billion deal will see it joining the ranks of the ultra-majors and puts it in position to potentially acquire the Roraima Block offshore Guyana, pending approval by Guyanese authorities.

Commenting on the deal, Rystad Energy founder and chief executive Jarand Rystad, said, “This acquisition represents a golden opportunity for Chevron to achieve a more leveraged capital structure that is better suited for the lower risk energy projects of the future.”

According to Bloomberg, the takeover puts Chevron neck-and-neck with the oil and gas production of ExxonMobil Corporation and Royal Dutch Shell Plc, both of which have dominated Big Oil over the past decade. The combined company’s cash flow last year, $36.5 billion, would have exceeded Exxon’s.

“Chevron now joins the ranks of the ultra-majors,” Roy Martin, an analyst at Wood Mackenzie Ltd., said in a note.

Chevron said the deal will acquire all the outstanding shares of Anadarko in a stock and cash transaction valued at $33 billion, or $65 per share. Based on Chevron’s closing price on April 11, 2019 and under the terms of the agreement, Anadarko shareholders will receive 0.3869 shares of Chevron and $16.25 in cash for each Anadarko share. The total enterprise value of the transaction is $50 billion.

In 2012, Anadarko was granted an exploration licence for the Roraima block offshore Guyana. A year later, its contracted research vessel MV Teknik Perdana was ordered out of Guyana’s Exclusive Economic Zone by the Venezuelan Navy while conducting a geophysical survey. Following this incident, Anadarko halted operations in Guyana until July 2015 when company officials met with Minister of Natural Resources, Raphael Trotman, and restated the company’s interest in drilling for oil in the licenced area.

Chevron’s acquisition of the Roraima Block would make it the second US oil major to control a block offshore Guyana. ExxonMobil is currently the Operator in the neighbouring 6.6 million acres Stabroek Block.

Chevron set to walk away from Anadarko take-over