OilNOWLatest News and Information from the Oil and Gas sector in Guyana
More
FeaturedNews
Updated: October 27, 2017 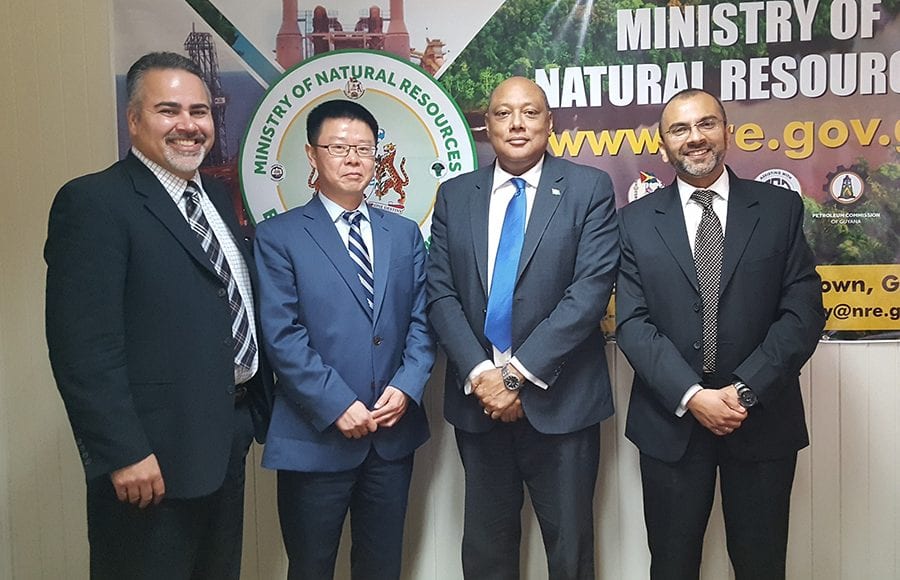 The relationship between the Government of Guyana and China National Offshore Oil Company (CNOOC) Nexen advanced further on Wednesday when a meeting was held between Raphael Trotman, Guyana’s Minister of Natural Resources and representatives of the company in Guyana.

CNOOC Nexen is part of the CNOOC group of companies, which is the largest offshore oil and gas producer in China with its headquarters in Beijing, China. It engages in a range of activities worldwide through companies that offer services in oil and gas exploration and development, refining and marketing, natural gas and power generation, engineering and technical and financial services. CNOOC Nexen owns a 25% interest in the Stabroek Block along with partners Hess (30% interest) and ExxonMobil (45% interest).

During the meeting, Minster Trotman was briefed on CNOOC Nexen’s operations worldwide and its plans to expand its operations locally.  Anand Gohil, the company’s Regional Manager, noted CNOOC Nexen’s support for green initiatives and applauded Guyana’s green economy trajectory. He also shared his company’s vision of being recognized as a safe, environmentally friendly company and a valued member of the community. Discussions also included some potential areas of collaboration as well as the company’s plans to develop a Corporate Social Responsibility (CSR) plan that will provide a roadmap for supporting growth and development in Guyana.

Mr. Trotman noted that Guyana welcomes Chinese investment; whilst tracing the historic ties between the two nations. The Minister expressed the hope that CNOOC Nexen would firmly establish themselves and contribute positively to Guyana’s development. He viewed the meeting as the first of many engagements that will unfold as the company develops a presence in Guyana.