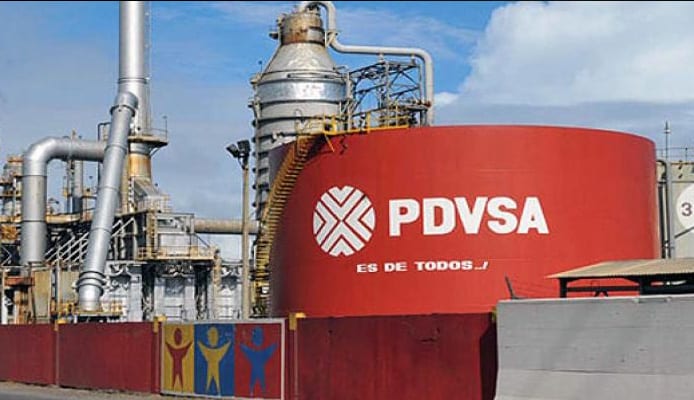 ConocoPhillips said it will receive $2 billion in a settlement with Petroleos de Venezuela SA, ending a dispute that’s severely crippled Venezuela’s ability to export the crude oil at the heart of its faltering economy.

An international tribunal awarded the amount in April for asset seizures carried out in 2007 by late Venezuelan President Hugo Chavez. Under the agreement announced Monday, state-owned PDVSA will make initial payments of about $500 million within 90 days, with the balance paid quarterly over four and a half years, Conoco said in a statement.

The $2 billion represents about a quarter of international reserves held at Venezuela’s central bank. PDVSA is behind on $6.1 billion of bond payments to creditors, and a judge in Delaware recently granted Canadian miner Crystallex the right to seize shares of U.S. refiner Citgo held by a Venezuelan parent, though the decision is being appealed.

If Conoco doesn’t get its money, “the company can resume global enforcement actions” of the award “and enforce the settlement agreement in all jurisdictions,” spokesman Daren Beaudo said in an email. “The agreement was developed in good faith, and we believe we have fashioned terms that are reasonable yet fully enforceable.”

Under the settlement, Houston-based Conoco said it will suspend legal actions it had mounted worldwide, including in the Dutch Caribbean where about 16 percent of Venezuela’s crude exports are stored before shipping to the U.S., China and India.

The pact comes days after Venezuela President Nicolas Maduro devalued the bolivar to trade nearly in line with the black market exchange rate in the latest attempt to deal with the country’s economic woes. The legal war waged by Conoco, in addition to U.S. sanctions, has severely hampered PDVSA’s ability to export crude, the commodity that bankrolls Maduro’s regime.

“We believe this settlement could potentially slow the decline rate of Venezuela’s oil production,” Clearview Energy Partners LLC said in a note to clients. Output fell from 1.61 million barrels a day in January to 1.26 million last month, according to the International Energy Agency.

For Conoco, the settlement could help the driller accelerate share buybacks — a key demand of investors — and fund increased capital spending on its drilling budget, Bloomberg Intelligence analysts Fernando Valle and Jonathan Mardini said in a Monday research note.

The deal “brings Conoco one step closer to a full resolution for this settlement and removes some doubt around the timing and amount Conoco might recoup,” Scott Hanold, an RBC Capital Markets analyst, said in a note Monday. “We are increasingly optimistic the company will successfully recover the full amount.”

Since May, the U.S. producer has relentlessly pursued PDVSA in courts across the globe, in a bid to force the Venezuelan oil giant to pay the arbitration award. Conoco filed attachment orders freezing assets in the Caribbean and is seeking to depose Citgo.

Conoco was also seeking to intercept potential proceeds from a lawsuit filed by PDVSA in U.S. courts against oil traders who have allegedly defrauded the company.

After the international tribunal in April awarded Conoco $2.04 billion, the company moved to take over oil facilities on the Caribbean islands of Bonaire, Curacao, St. Eustatius and Aruba. The moves created a hurdle for exports even as Venezuela’s domestic troubles cut into production at PDVSA, further hampering the country’s ability to raise cash and pay off its debts. Vessels were ordered to immediately pull away from Caribbean ports, creating a backlog of ships around Venezuela.

The outage affected clients around the world. Fuel oil shipments to China, used to pay for oil loans with Venezuela, came to a stop. Thailand’s asphalt producer Tipco Asphalt PCL halted its refinery in Malaysia in part because of supply disruptions in Venezuela.

Unable to load in the Caribbean, PDVSA instead loaded oil tankers via ship transfers off the coast, which partly alleviated the problem. The state-controlled company also boosted sales to the U.S. in smaller Aframax-size vessels, which limited it to smaller shipments but reduced its dependency on supertankers loaded in the Caribbean. (Bloomberg)

US imposes sanctions on Venezuela’s PDVSA