OilNOWLatest News and Information from the Oil and Gas sector in Guyana
More
FeaturedNews
Updated: March 14, 2022 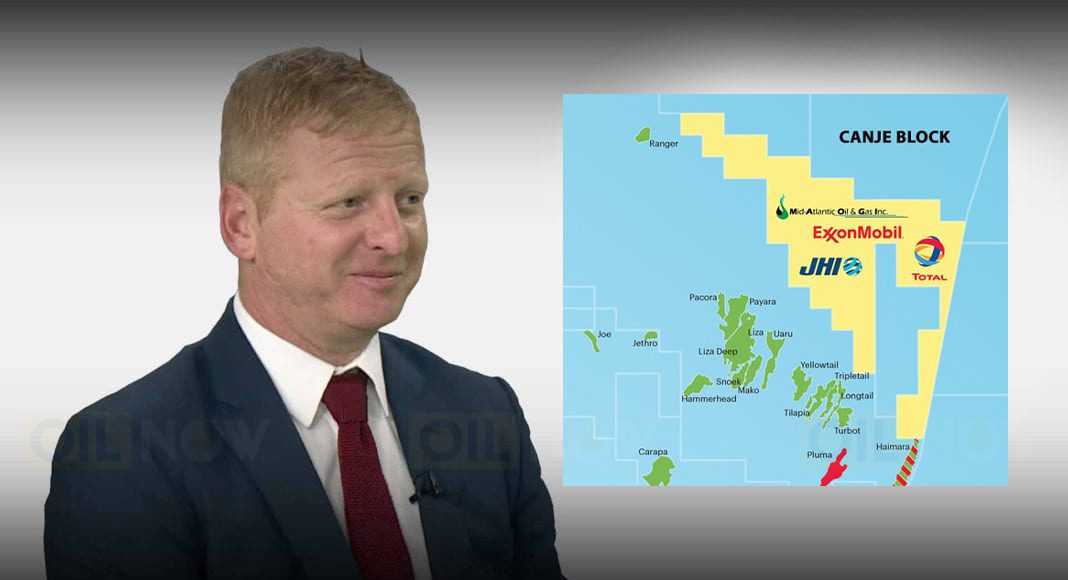 The deal is part of a proposed cashless acquisition, with a value of approximately US$52 million at the Company’s current share price, which would make Eco the sole owner of JHI’s cash balance and its 17.5% WI in the Canje Block

The Canje Block, offshore Guyana, is directly adjacent to the prolific Stabroek Block where ExxonMobil has discovered in excess of 10 billion barrels of oil equivalent.

Eco will acquire JHI’s capital balance, which is expected to be a minimum of US$15 million upon completion of the Acquisition. There will be consideration in the form of new common shares issued to JHI’s shareholders based on an exchange ratio of 1.1994 new Eco common shares and convertible securities leading to JHI shareholders holding approximately 34% of Eco post Acquisition at current share count.

The Acquisition adds to Eco’s strategic acreage position in Guyana and paves the way for further drilling activity on the Company’s blocks over the coming years. The Acquisition is currently expected to close in Q2 2022 subject, inter alia, to the signing of an Arrangement Agreement and satisfactory completion of due diligence by Eco and any requisite Government of Guyana, Canje Block partners, and stock exchange approvals.

On closing, JHI has the right to appoint two non-executive Directors to Eco’s eight-member Board of the enlarged Group, bringing further exploration expertise to the Company.

Information on the Acquisition

JHI is a private company incorporated in Ontario and headquartered in Toronto, Canada.   If and once completed the Acquisition provides the enlarged Eco Group with ownership of 17.5% PI in the Canje Block offshore Guyana. The Canje Block is Operated by Esso Exploration & Production Guyana Limited (35%), a subsidiary of ExxonMobil Corporation, with the remaining partners including TotalEnergies E&P Guyana B.V. (35%), JHI Associates (BVI) Inc. (17.5%) and Mid-Atlantic Oil & Gas Inc. (12.5%).  On closing of the Acquisition, JHI is to have a minimum cash balance of $USD 15 million, acquired as part of the transaction with Eco.  The Canje Block is approximately 4,800km2, located approximately 180 to 300 kilometers offshore Guyana in water depths ranging between 1700 and 3000 meters.

The Canje Block is a large and significant license which captures the lower slope and base of slope play fairways, channels and fans outboard of multiple ExxonMobil discoveries in the adjacent Stabroek Block which is immediately up-dip of Canje. Canje is covered with 6,100km2 of 3D seismic and holds over three dozen prospects in four proven plays in the Lower Tertiary and Upper Cretaceous confined channels, Lower Cretaceous Carbonate structures and, with recent drilling of Sapote-1 well and Stabroek discoveries, now offers the opportunity of yet deeper horizons.

Pursuant to the Term Sheet and subject, inter alia, to the signing of a binding Arrangement Agreement and completion of the Acquisition, Eco Atlantic will issue to JHI’s shareholders, along with the holders of any JHI options and warrants, such number of new common shares in Eco that at the above-stated exchange ratio and current share count (post the issue of the Azinam Group Limited acquisition consideration shares) will provide JHI’s shareholders with 34.1% of Eco’s issued share capital as enlarged by such issue, or approximately 127 million new common shares of Eco, providing for a cashless acquisition, with a value of approximately US$52 million at the Company’s current share price, to become the sole owner of JHI’s cash balance and its 17.5% PI in the Canje Block. The Term Sheet provides Eco with a 90-day exclusivity period and terminates, or may be terminated, upon the occurrence of certain events.

A further announcement will be issued on the execution of the binding Arrangement Agreement.

John Cullen, Founder and CEO of JHI said the transaction provides JHI’s shareholders access to Eco’s exciting portfolio of exploration opportunities in the emerging oil basins of Namibia and South Africa, and in Guyana with their Orinduik block, while maintaining their exposure to the Canje Block, where work has been progressing steadily to identify the next prospect to drill.

“It also represents the culmination of a tremendous amount of work from JHI’s technical team which, over the last six years, saw two supermajors join the Canje Block, and three wells drilled providing valuable information towards unlocking the potential of the deeper water portions of the Guyana-Suriname Basin,” Cullen said. “JHI’s team has come to work well with Eco’s team since they became shareholders last year, and we know that they will continue to be good stewards of the Canje Block as they add it into their impressive and expanding exploration portfolio.”

Meanwhile, Gil Holzman, Co-Founder and CEO of Eco Atlantic said being a shareholder of JHI since last year has given the company a deep understanding of the Canje Block and its prospectivity.

“It has also given us the opportunity to get to know the great management team at JHI and their technical and business achievements to date.  Because of these facts, we believe that there is considerable strategic rationale in acquiring JHI,” Holzman said.

He pointed out that Eco’s ambition is to become the “go-to” small-cap exploration vehicle for investors seeking exposure to high-impact drilling programs in three of the world’s most exciting hydrocarbon provinces in Guyana, Namibia and South Africa.

“This acquisition gets us another step closer to that goal and builds on the Azinam acquisition we announced earlier this year,” Holzman stated.

He said this transaction adds to Eco’s strategic acreage position in Guyana and ensures that there will be a number of drilling catalysts over the next couple of years on Eco’s eight offshore blocks. In addition, the enlarged Group will benefit from JHI’s current cash position, adding US$15 million to Eco’s balance sheet, further strengthening the Company’s liquidity position.

Holzman said given Eco’s strategic investor base and proven access to the public capital markets, the anticipated addition of JHI’s interest in the Canje Block and its working capital, will further augment the enlarged Group cash position for its share of all near term exploration programs on its current blocks.

These include 2B in South Africa where drilling preparations for a late Q3 spud are underway, the Eco Orinduik Block offshore Guyana, Block 3B/4B in Orange basin South Africa and elsewhere in the current and future portfolio of the enlarged entity.

“Ahead of our planned drilling campaign on Block 2B offshore South Africa in late Q3 2022, we are also looking to finalise drilling targets in Eco’s Orinduik Block, offshore Guyana. Demonstrating that, as ever, the Eco team are head down and focused on delivering value for shareholders. We look forward to providing further corporate updates as appropriate,” Holzman said.