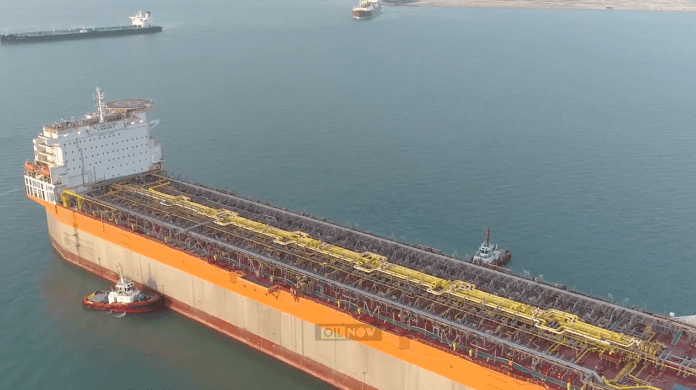 ExxonMobil’s 4th proposed development project offshore the South American country of Guyana will produce approximately 150,000 – 190,000 barrels of oil per day (bpd), pushing total production at the Stabroek block to 750,000 bpd. This latest development, once approved, will follow the Liza Phase 1 and 2 projects and a third development at Payara, which is also awaiting final approval from authorities.

During the early stage of production operations at Hammerhead, the project is anticipated to produce an average of approximately 4,500,000 – 5,200,000 barrels of crude oil per month. These estimates are preliminary and are subject to change.

The FPSO will be a Very Large Crude Carrier (VLCC) size floating facility with double hull protection, with approximate dimensions of 340 m long by 60 m wide by 33 m deep (1,115 ft long by 197 ft wide by 108 ft deep), and will be moored on location, approximately 160 km (99 miles) offshore.

The oil production complex will have an oil storage capacity of approximately 1.6 – 2.0 million barrels of oil within its hull. Its mooring system will be designed to keep the FPSO on station continuously for at least 20 years. At peak production during Hammerhead operations, the FPSO will offload oil to conventional tankers approximately every 7 – 8 days. The conventional tanker will be held in position with the assistance of tug(s) to maintain a safe separation distance from the FPSO.

Hammerhead is the 9th discovery to have been made at Stabroek Block which experts said opened a new play that potentially unlocks a pathway for the emergence of a multi-billion-barrel province.

Global exploration has more than 30 years of life left –...