Hammerhead, the 9th of 13 discoveries made so far off the oil-rich coast of Guyana, opened a new play in the Stabroek block that potentially unlocks a pathway for the emergence of a multi-billion-barrel province. So says Westwood Global Energy Group, a provider of market research, subscription services and consultancy for the global oil and gas industry.

Westwood said the significance of Hammerhead is that it opens a new play in sandstone reservoirs of Tertiary age, younger and distinct from the previously successful Cretaceous aged reservoirs in the Liza sandstone play and Ranger carbonate plays.  “The new Tertiary play opens the pathway for the emergence of a possible 10 billion barrel plus province, second only in its scale as a new emerging province this century to the Pre-Salt of Brazil.  What is also remarkable is that Guyana has a population of only 800,000 people.”

This scale of resource could support a plateau production level of over a million barrels a day for a decade or more, the consultancy group said.

“One million barrels a day of production would equate to 456 barrels per citizen per year, which would make Guyana the world’s biggest per capita oil producer.  At $70/barrel this level of production would generate US$32,000 per capita of gross annual oil revenue, before costs and oil company profits.  With a current GDP per capita of US$4,750, Guyana faces an extreme transformation in its fortunes,” Westwood stated. 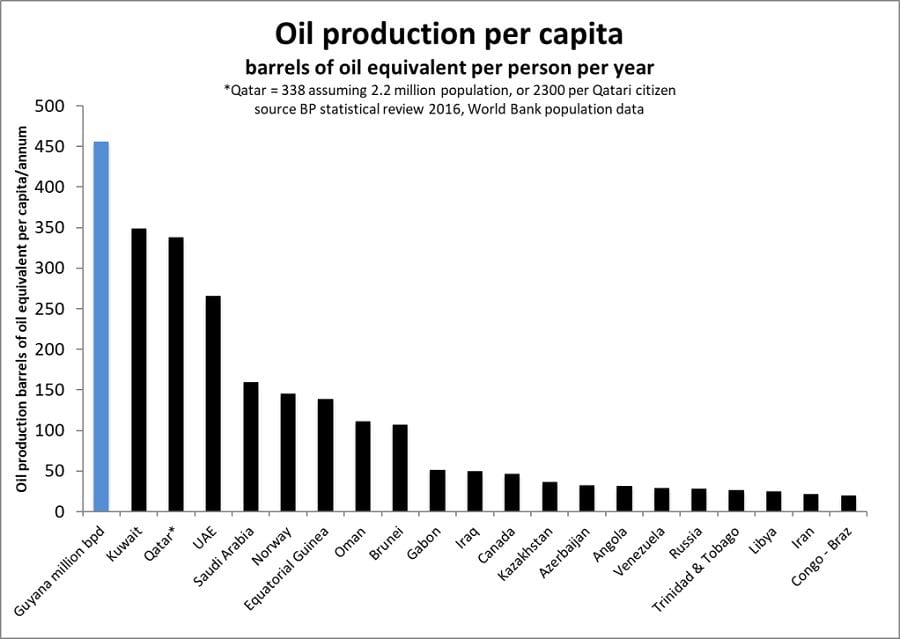 The opportunities for Guyana and the challenges it faces are huge in equal measure “and its peer top 10 per capita oil producers, such as Kuwait, the UAE, Norway, Equatorial Guinea and Gabon are ones they can learn lessons from – for better and for worse,” Keith Myers, President, Research, pointed out.

The Hammerhead-1 well encountered approximately 197 feet (60 meters) of high-quality, oil-bearing sandstone reservoir after being drilled by the Stena Carron in August 2018.

Shared vision for oil money will open pathway to prosperity