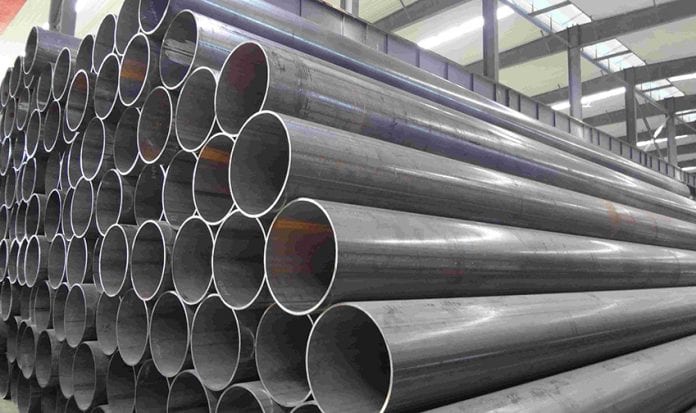 The first shipment of piping material to be used for oil production in the Liza development project offshore Guyana arrived on Wednesday evening at a shore base facility in the South American Country. This represents a major step towards the use of indigenous facilities for servicing offshore operations.

The historic development was announced during Day I of the inaugural Guyana International Petroleum Exhibition and Summit (GIPEX).

ExxonMobil’s Guyana Project Executive, Ching Khoo, was at the time providing an overview of the Oil and Gas development in Guyana with focus on the Liza Phases 1 & 2 development for the several hundred industry executives attending GIPEX 2018 looking for partnership and investment opportunities locally.

The ExxonMobil Executive was at the time impressing too on the importance of local content and input when he announced that the very first shipment of pipes for use on the wells would be landed at the Guyana Shore Base Inc. (GYSBI).

The Shorebase located at Houston East Bank Demerara – with its access to the Demerara River – is the only Guyanese owned company to have been handed a Tier 1 contract by ExxonMobil as it prepares for first oil in March 2020.

GYSBI Director, Lars Mangal, also confirmed with OilNOW that the shipment is in fact the very first shipment to be docked and offloaded at the state of the art facility, currently in the final stages of its construction.

The GYSBI Director told OilNOW the landing of the vessel with the equipment has to be seen in the context of the emerging oil and gas industry and what it means for the sector.

According to Mangal, “with the first shipment to be landed at a shore base here in Guyana, it means that we have begun to transition the use of those facilities from in Trinidad to right here in Guyana…this is a major development.”

Mangal made similar remarks during a technical presentation to the delegates at GIPEX 2018. He told the gathering, while excited at the presentation by the ExxonMobil Project Executive about the accelerated rate of production and the company looking to quickly utilize at least three Floating Production Storage and Offloading (FPSO) vessels in its operations, the question must be asked; “What does it mean for our local content.”

Addressing the GIPEX 2018 Delegates, Mangal was adamant that investing in local content such as with GYBSI and its Shorbase, serves as a catalyst for a number of opportunities in the sector as they emerge.

He suggested that in building local capacity countries often run the risk of taking a path of least resistance which does not always achieve its desired outcome.

What the GYSBI Director has instead called for among the potential industry investors and partners, is for more a innovative approach.

According to Mangal, facilities such as the shore base operated by GYSBI will have a multiplier effect and that other support services for the Oi and Gas industry currently outsourced to places like Trinidad and Tobago, be migrated to Guyana.

Public consultation on Liza Phase 2 EIA to start soon in...