OilNOWLatest News and Information from the Oil and Gas sector in Guyana
More
FeaturedNewsProduction
Updated: January 7, 2022

The market for floating production, storage, and offloading (FPSO) units almost brushed off the pandemic’s effect in 2021 and is likely to continue apace in 2022, with 10 new awards expected, according to a Rystad Energy report. Two lease contracts were awarded in the fourth quarter of 2021, bringing the total for the year to 10 – up from just three in 2020 – a strong rebound for the FPSO market.

Demand for FPSO units in Brazil was a significant contributing factor that drove 2021 growth, with seven of last year’s 10 contract awards being Brazilian projects. The South American nation is expected to continue driving global awards in 2022, with an additional three FPSOs expected. Not only is Brazil delivering more awards, but the Brazilian projects are expected to be the largest in terms of production capability. For instance, the unit bound for P-80 will become the ninth in the Buzios area. It will have an oil processing capacity of around 225,000 barrels per day (bpd) and a gas processing capacity of about 12 million cubic meters per day, which is the same size as the FPSO Almirante Tamandare awarded in early 2021.

In 2022, fellow South American player Guyana is expected to contribute one FPSO to the global total, with the UK adding two projects. Angola, Australia, China, and Malaysia are forecast to each award one new FPSO contract this year.

“With around 30 FPSO units under construction or queued up for construction, and another 10 expected to be awarded over the next 12 months, the market is set to build on its recent success. However, as witnessed in many other facets of the global economy in recent months, supply chain concerns linger and will test the market’s ability to take in new contracts without uncontrollable cost overruns and delays,” says Zhenying Wu, a senior analyst with Rystad Energy. 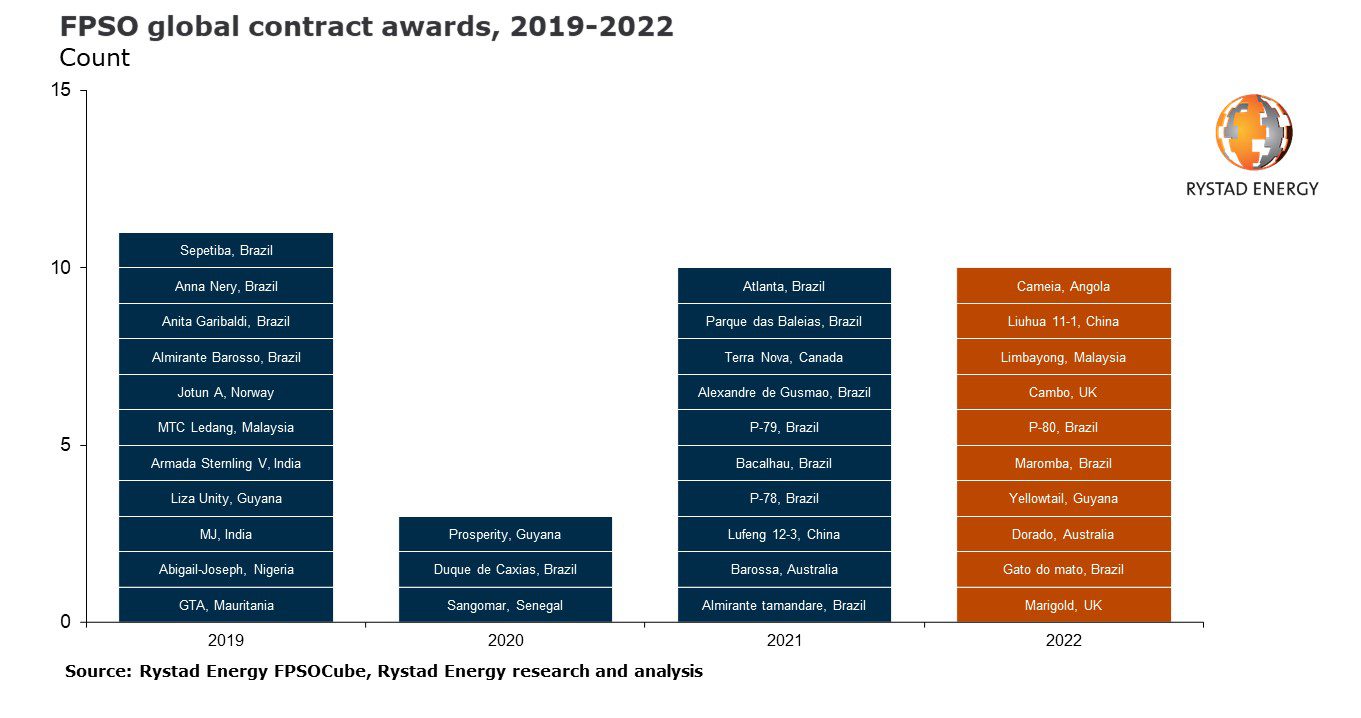 The FPSO market saw a strong finish to 2021, with two lease-and-operate contracts, two front-end engineering and design (FEED) contracts and one contract extension awarded in the fourth quarter.

In Brazil, Yinson has been awarded two letters of intent (LOI) from Petrobras to supply the Integrado Parque das Baleias (IPB) FPSO and for operation and maintenance services under a lease-and-operate agreement lasting 22 years and six months from the day of final acceptance. The FPSO will be deployed at the Jubarte field in the North Campos basin and is scheduled to start production in late 2024.

Enauta Energia issued Yinson another LOI to provide, operate and maintain an FPSO at the Atlanta field in the Santos basin in Brazil. The job covers the adaptation of FPSO OSX-2 by Yinson through a turnkey engineering, procurement, construction and installation (EPCI) contract, with warranty and operations and maintenance for 24 months. The FPSO acquisition and adaptation cost will be around $505 million. Yinson has the option to purchase a unit linked to funding. If the call option is exercised, it will be linked to charter, operation and maintenance contracts for 15 years, which may be extended for another five years, totaling $2 billion for the 20 years. The contract is Yinson’s third project award in Brazil and is subject to a final investment decision during the first quarter of 2022.

Elsewhere in South America, ExxonMobil awarded SBM Offshore an FPSO FEED contract for the deepwater Yellowtail development in the Stabroek block off the coast of Guyana. The FPSO will be designed to have an oil-processing capacity of 250,000 bpd, a gas-processing capacity of 450 million cubic feet per day and storage of up to 2 million barrels. When finished, the FPSO will be the company’s largest producing unit ever built.

ExxonMobil is currently producing from Stabroek via the Liza Destiny FPSO. The Liza Unity FPSO arrived in Guyanese waters on 26 October, and ExxonMobil expects both units to produce this year. When the Prosperity and Yellowtail projects come online in 2024 and 2025, respectively, ExxonMobil will have a total processing capacity of more than 800,000 bpd in Guyana.

In Nigeria, BW Offshore secured a lease extension for the FPSO Sendje Berge, operating for Addax Petroleum Exploration (Nigeria) Ltd, that will run through to the fourth quarter of 2022.

In Norway, Aker Solutions received an LOI for a FEED contract from Equinor to supply an FPSO to be employed at the Wisting field in the Norwegian sector of the Barents Sea. The scope of the FEED is to provide front-end engineering design for a circular FPSO solution, which includes an option for EPCI of the FPSO topside. If the project moves forward to the execution phase, the EPCI option potentially represents a significant contract that is estimated to be worth between $960 million and $1.45 billion.