OilNOWLatest News and Information from the Oil and Gas sector in Guyana
More
FeaturedNews
Updated: July 17, 2021

Indian refiners have been snapping up maiden import deals for newer crudes such as Guyana’s Liza and Brazil’s Tupi in a sign that one of Asia’s fastest-growing oil consumers is increasingly looking to diversify its feedstock basket and have steady supply sources beyond the Middle East.

The purchases of newer crudes not only highlight the growing flexibility of Indian refiners, but also that refiners are increasingly keen to make spot purchases a relatively bigger part of their portfolios in order to take advantage of market fluctuations.

The recent purchase by IOC from Guyana is a part of continuing efforts to diversify the crude basket, said IOC chairman Shrikant Madhav Vaidya.

“India has been diversifying its crude imports, including taking substantial volumes from the US in recent months. With crude production from Guyana set to rise over the coming years, it will become a new source of supply for India, provided it is priced competitively,” said Lim Jit Yang, adviser for Asia-Pacific oil markets at S&P Global Platts Analytics.

Liza crude is a medium sweet grade with 32.1 API gravity and 0.51% sulfur content produced at the Stabroek block in Guyana. Indian oil ministry officials said the latest deal for Liza crude could open up the possibility of exploring long-term supply contracts with the Guyanese government.

IOC has also entered into a term contract for 3 million mt of US crude for further diversification.

“Increasing crude prices, and the effect it has on fuel prices in the country, has added severe inflationary pressures in recent months as India’s economy is beginning to pick up post pandemic-induced slowdown. India has thus been urging OPEC to gradually increase production and temper prices, which has not received an enthusiastic support from the Gulf exporters,” said Rajat Kapoor, managing director for oil and gas at AWR Lloyd.

“India, in a bid to diversify its crude imports from OPEC producers, has been looking to procure more North and Latin American grade crudes,” he added. 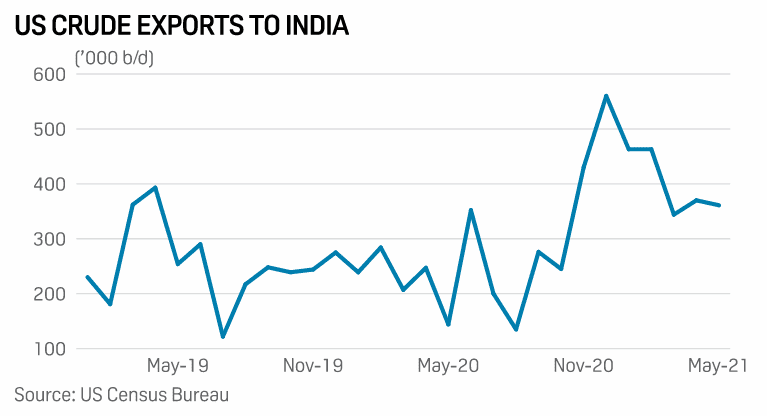 Mangalore Refinery and Petrochemicals Ltd. is believed to have bought its first ever cargo of Brazilian Tupi crude oil earlier in 2021, according to sources. Traders said IOC also bought barrels of Norway’s Johan Sverdrup crude for the first time earlier this year, although there was no confirmation of this, either from the buyer or the seller.

India in June again urged OPEC to phase out its production cuts, saying the recent rise in oil prices was threatening the consumption-led recovery of the global economy.

Petroleum Minister Dharmendra Pradhan also highlighted recently that “price-sensitive” importing nations like India would feel the heat if global crude rise above $80/b.

Private refiners like Reliance Industries and Nayara Energy run newer and complex refineries that can handle heavier grade crudes. They have been steadily increasing purchases of Canadian crudes at a substantial discount to Brent, Kapoor said.

Analysts said that with no clear signs about when Washington will lift sanctions on Iran and Venezuela, Indian refiners are increasingly looking for alternatives to ensure their feedstock supplies remain plentiful.

IND Economics said in a recent research note that an anticipated rise in Iranian supply would be at risk if nuclear talks drag on further into H2.

“However, it would mean that other OPEC+ members would have more room to increase output later this year. Additional supply from OPEC+ will be needed over the second half of this year, with demand expected to continue its recovery,” it added.

OPEC+ abruptly canceled its meeting July 5 with no new date set after Saudi Arabia and the UAE failed to agree on the terms of a deal that could see 400,000 b/d of extra production each month added to the market from August.

The dispute centers around the UAE’s demand for its baseline — the level used to calculate its quota — to be revised closer to its current 4 million b/d of capacity. S&P Global Platts Analytics is optimistic a resolution will be found.