OilNOWLatest News and Information from the Oil and Gas sector in Guyana
More
FeaturedNews
Updated: November 25, 2021 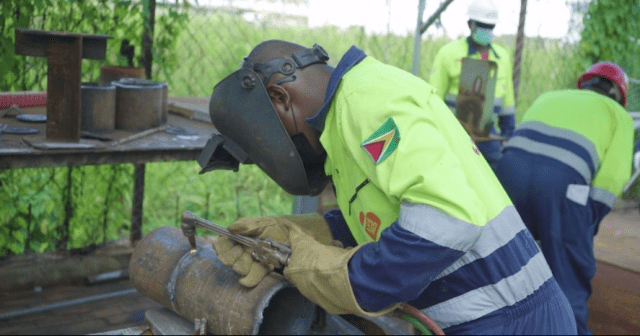 The Government of Guyana announced on Wednesday that it has partnered with United Kingdom-based 3T EnerMech to offer scholarships to Guyanese for technical careers in the oil and gas industry.

The training is being done under the Guyana Online Academy of Learning (GOAL), an initiative the government launched last year to provide 20,000 online scholarships to its citizens. GOAL’s Deputy Director, Ronald Singh told Guyana’s Department of Public Information (DPI) that training will start in 2021, for about 150 persons in the first batch.

EnerMech’s courses are the first under the GOAL initiative to be blended. It has set up an office in Guyana and will be providing practical training for Guyanese at its facilities. The technical pathways being offered to Guyanese are Rigging and Erecting, SMP (Safety Management Pack) Operative, and Fabric Maintenance, Coating, Scaffolding.

The Government is operationalizing multiple pathways to train Guyanese for the industry. Prior to the introduction of these technical programmes, GOAL introduced multiple master’s level degree programmes which would position Guyanese for careers in the oil and gas industry.

Vice President Dr. Bharrat Jagdeo also told reporters earlier this month that the Government intends to open a national training institute in 2022 to train as many as 1,000 persons per year.

President Dr. Mohamed Irfaan Ali said in October that the Government will take local content legislation to Parliament before the year ends.

The first schedule of the draft legislation, which has been circulated for public consultation, contains provisions calling for an aggressive increase in the use of Guyanese workers, goods, and services over a period of 10 years after oil block licencees and sub-contractors have entered into their agreements.
A team from the Government of Ghana is lending its expertise to Guyana, by conducting an analysis of the draft Bill.