OilNOWLatest News and Information from the Oil and Gas sector in Guyana
More
ExplorationFeaturedNews
Updated: October 26, 2018 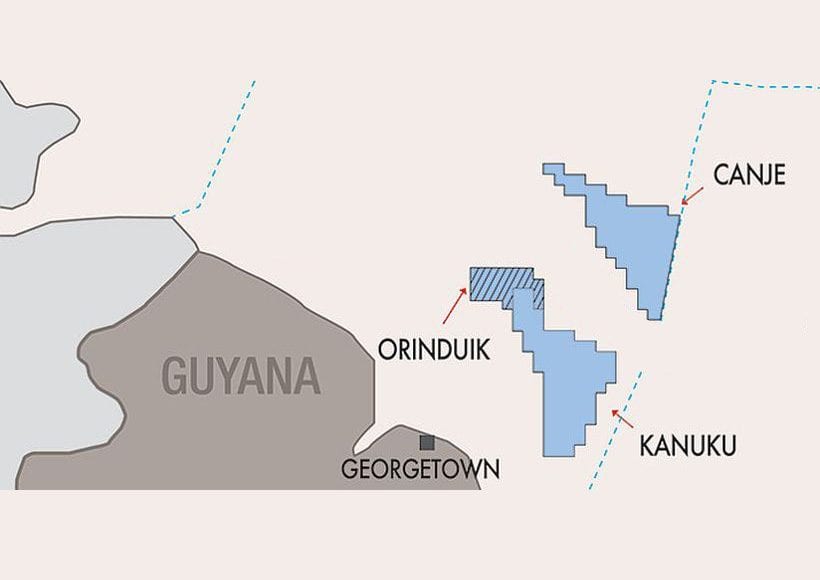 The partners in the Orinduik Block, offshore Guyana;Tullow (Operator), Total Petroleum SA, and Eco (Atlantic) Oil & Gas Ltd., are in discussions to accelerate their work programme and to consider adding an additional well in 2019.

In an update released on Friday, Eco Atlantic said additional announcements will be made once drilling plans and targets selection are confirmed by the partners. “The opportunity the companies share on the Orinduik Block in Guyana is outstanding, with much lower near-term risk, following the amazing success of ExxonMobil on the adjacent Stabroek block and our own 3D data interpetation. We expect 2019 to be a significant and defining year for Eco,” Gil Holzman, CEO of Eco stated.

Meanwhile, the company’s COO, Colin Kinley, said the 2.9 billion barrels of oil equivalent that has been defined on the Orinduik block continues to advance with all of the Exxon discoveries, ongoing development drilling, and the continued interpretation of the extensive seismic data. “We are extremely confident in what we have there and our selective and focused exploration approach, with two of the world’s best exploration teams from Tullow and Total working with us, the prospect of a new era for Eco Atlantic.”

Eco Atlantic is a TSX-V and AIM listed Oil & Gas exploration and production Company with interests offshore Guyana and offshore Namibia, where significant oil discoveries have been made.

In Guyana, Eco Guyana holds a 15% Working Interest alongside Tullow Oil (60%) and Total (25%) in the 1,800 km2 Orinduik Block, adjacent and updip to the deep-water Liza Field and Snoek, Payara, Pacora, Turbot, Longtail and Hammerhead discoveries, recently discovered by ExxonMobil and Hess, which are estimated to contain in excess of 4 billion barrels of oil equivalent, making it one of a handful of billion-barrel discoveries in the last half-decade.