OilNOWLatest News and Information from the Oil and Gas sector in Guyana
More
FeaturedNews
Updated: June 22, 2022

South America’s newest oil producing nation is in the midst of an oil boom which started in 2015 when ExxonMobil discovered the Liza field, the largest deepwater discovery in the world that year. Since that time, the US oil major has made over 30 discoveries at the Stabroek Block, amounting to nearly 11 billion barrels of oil equivalent.

The 2016 Stabroek Block Production Sharing Agreement (PSA), which outlines the terms and conditions under which the company, along with co-venturers Hess and CNOOC, operates, has been the subject of criticism with some claiming the international oil companies (IOC) are getting the lion’s share of revenues. But an examination of the PSA terms and the revenues Guyana is receiving from oil production show that it is the South American country that is getting the larger share.

In the Stabroek Block PSA, 75% of the oil produced is set aside for the IOCs to recoup investments made in their exploration and production operations. Guyana is not required to plug any funds into these activities. 25% remains as profit, to be split 50/50 between Guyana and the Stabroek Block consortium. This means the partners get 12.5%, while 12.5% goes to the government.

While this is an equally split profit, royalty is what tips the scale. The consortium is required to pay 2% of gross revenues out of its share of the profit. That leaves the consortium with 10.5% and the government with 14.5%. 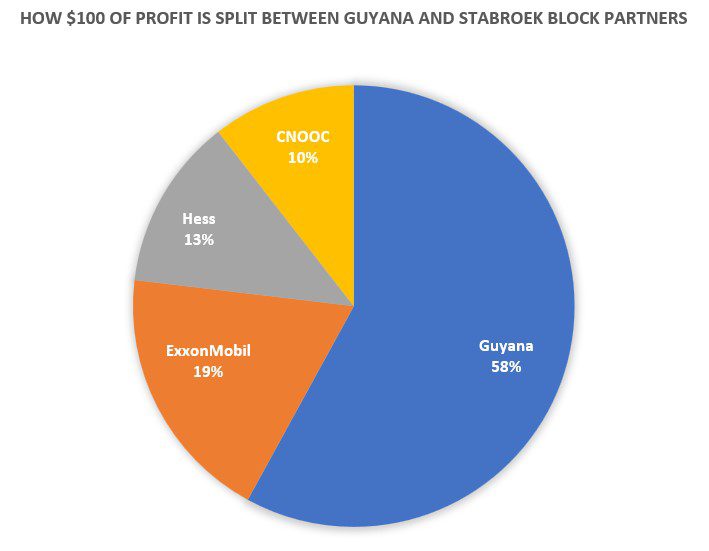 Because the consortium must pay royalty, their profit is $2 less at $10.50.

In a comment to OilNOW on Tuesday, ExxonMobil Guyana said royalty is not recoverable. “I can confirm that ExxonMobil Guyana and the other Stabroek Block Co-venturers are not cost-recovering royalty payments made to the government of Guyana,” said Media and Communication Manager, Janelle Persaud.

After the partners substantially recover exploration and development costs over time, the required cost oil allocation will become less than 75% of the oil produced.

As a result, the profit to all parties will increase. Guyana will always receive the highest share of the profits.

Guyana’s PSA provides for the payment of taxes by the contractor group and subcontractors. However, this tax liability is included in the government’s share of profit oil, a system known as “tax paid on behalf (TPOB).”

Such a system is not unique to Guyana as it is used by many other nations such as Azerbaijan, and Qatar.

Trinidad and Tobago’s deepwater model PSA sees government paying taxes and royalty out of its share of the profits.

The International Monetary Fund (IMF) has backed this approach in Guyana’s PSA as it previously noted advantages to be had with such a system, including fiscal stability for both government and contractor.

The Guyana government has assured the public that the model PSA it will introduce for the deepwater auction later this year will feature terms that secure an even higher government take. To get more value for Guyana, a national oil company (NOC) may even be established, authorities have said.