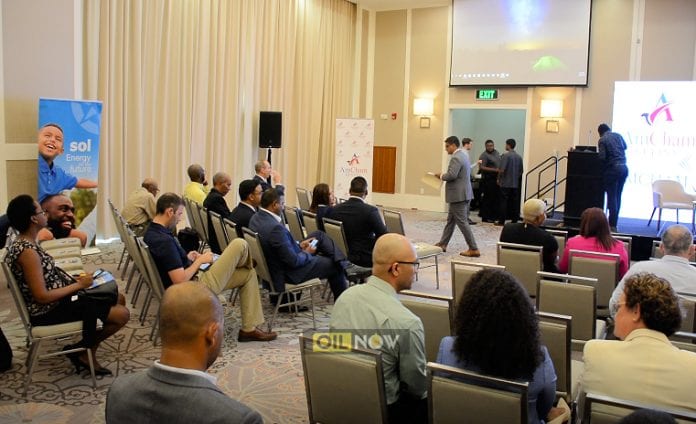 As Guyana prepares for first oil, the need for Health, Safety, Security and the Environment (HSSE) standards was further highlighted on Wednesday when the American Chamber of Commerce Guyana (AMCHAM), in collaboration with its sister organisation in Trinidad and Tobago, hosted its inaugural HSSE Conference at the Marriott Hotel in Georgetown.

While giving the keynote address, AMCHAM President Zulfikar Ally said, “I don’t think there could have been a better time to highlight the work that has been done so far and what needs to be done to prepare our country, and more specifically the private sector, to be responsible actors toward the environment.”

Guyana —a newcomer to the oil industry— is becoming more conscious of HSSE standards, especially as members of the South American country’s private sector are eager to be engaged as suppliers to oil companies and their contractors.

“It is incumbent on companies to raise their standards in HSSE if they want to remain competitive, attract investors and deliver value at an international level and if they want to win the hearts and minds of the people of this country,” Ally said.

He added that establishing a culture of conscientious decision-making in regard to HSSE matters would probably guarantee the success of an organisation that operates in the oil and gas sector.

His counterpart from Trinidad and Tobago, Patricia Ghany echoed his sentiments stating that the development and implementation of sound HSSE policies and the creation of a business culture that enforces these policies saves lives and protects the environment.

“Establishing the right safety systems and policies begins with ensuring the right culture in any business organization. For a business to transform, the culture needs to change. Changes in the way we do things, how we operate,” Ghany reiterated.

Highlighting Guyana’s position as a developing oil state, Ghany said experts predict that Guyana will become one of the wealthiest Caribbean countries in 10 years. She urged that Guyana learns from the experiences in the oil and gas industry and ensure that appropriate systems are in place to protect the environment.

Also speaking at the event ExxonMobil Guyana’s Production Manager, Mike Ryan, said HSSE is a partnership between companies operating in the industry and all stakeholders. “We have lots of partners with us to help us be successful here in Guyana, onshore and offshore. A lot of individuals, a lot of different companies in our workforce,” he said, adding, “This partnership builds common ground, common understanding and win-win solutions.”

AMCHAM Guyana and AMCHAM Trinidad and Tobago are part of a network of AMCHAMS called the Association of American Chambers of Commerce of Latin America and the Caribbean.

No award of oil blocks before elections

American Chambers teaming up for 1st HSSE conference in Guyana

No award of oil blocks before elections