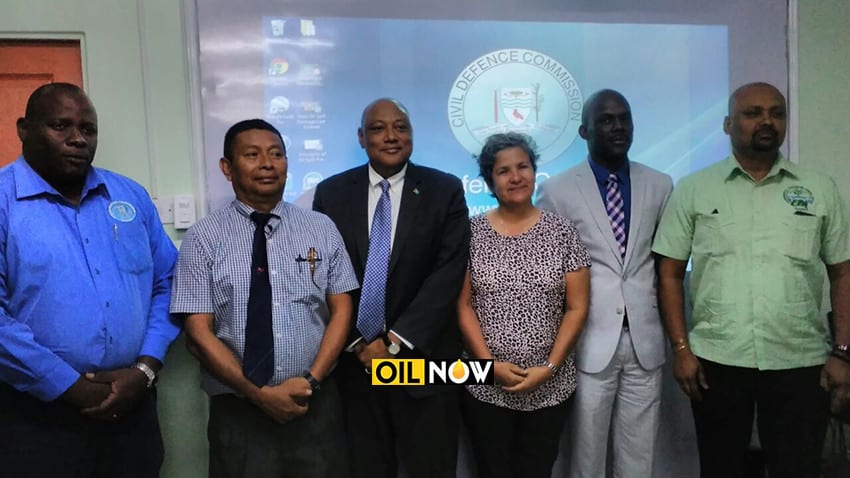 Guyanese authorities today began—through a one day stakeholder workshop—a review of its National Draft Oil Spill Contingency Plan, for finalizing and implementation within the next 24 months, ahead of first-oil in March 2020.

Spearheaded by the South American country’s Civil Defence Commission (CDC) under the auspices of the Ministry of the Presidency, the country’s first draft ‘oil spill response plan’ was prepared by Safety Director of Guyana Maritime Administration’s (MARAD), Captain John Flores.

The one-day stakeholder consultation venued at the CDC’s Thomas Lands, Georgetown Headquarters, saw in attendance representation from various entities including the Guyana Police Force, the Environmental Protection Agency and the Guyana Marine Turtle Conservation Society, among others.

Minister with responsibility for Guyana’s Natural Resources sector, Raphael Trotman, told those in attendance of his government’s commitment to developing its new found petroleum resources and reminded of international environmental obligations.

Mr. Trotman told those undertaking the first review of the national oil spill plan that Guyana, in 1998, became a member of the United Nations’ International Maritime Organization (IMO) and is a signatory to the IMO’s International Convention on Oil Pollution Preparedness, Response and Cooperation (OPRC).

In 2010 Guyana also acceded to the Cartagena Convention and all three of its protocols including the “Protocol Concerning Co-operation in Combating Oil Spills in the Wider Caribbean Region.”

MARAD’s Captain Flores, in outlining the draft contingency plan for stakeholders informed that the IMO had already deemed the draft ‘adequate’ with a recommendation that it be built on through consultations, and implemented.

According to Mr. Trotman, the plan will be presented to the Guyanese Cabinet Counsel of Ministers for its approval once finalized through widespread consultations—activities to be undertaken in the coming 24 months.

Director General (ag) of the CDC, Lieutenant Colonel Kester Craig, in remarks ahead of the working sessions, disclosed that in recognizing the need to have systems and capacity in place to respond to the possibility of environmental pollution and oil spills, government has been working in partnership with US oil major ExxonMobil, in putting together a series of activities aimed at building up domestic capacity.

The stakeholder consultation on the draft contingency plan, according to the CDC Director General (ag), is meant for a “critical review,” since the intent of the plan is to implement a framework, “which would cater for coordinated response action to potential onshore and offshore oil spills.”

The plan, he said, “needs to be simple but comprehensive, accessible, readily updatable and reflective of not only the working culture of Guyana but also in line with international standards and best practices.”

Oil spill response: Guyana must be prepared for all eventualities –...