OilNOWLatest News and Information from the Oil and Gas sector in Guyana
More
FeaturedNewsRegional
Updated: December 19, 2019

Maduro holds talks with U.S. creditors in a push to end embargo 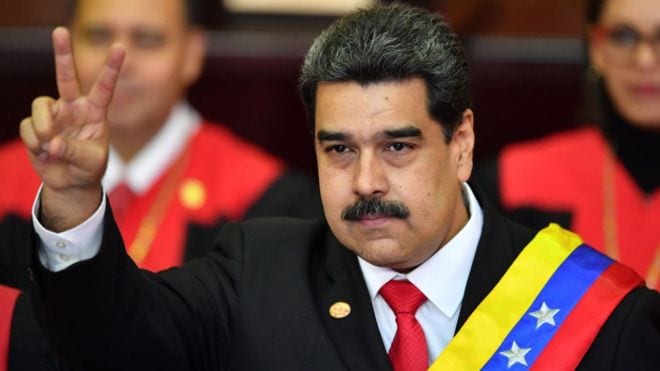 (Bloomberg) President Nicolas Maduro of Venezuela, dismissed as a goner after the U.S. put its weight behind his political rival and crippled his government with sanctions, is offering an unorthodox payback to Wall Street creditors as part of a long-shot effort to get the Trump administration to reverse its policy.

In recent weeks, several American financiers have huddled in Caracas with top government officials, including Maduro, according to five people familiar with the matter. They discussed a complex plan to pair up creditors, who hold $60 billion of defaulted bonds, with a foreign drilling company that would be granted the rights to some of the country’s richest oil fields. Some money could go to humanitarian aid for crisis-stricken Venezuelans.

Lawyers working for Maduro convened a call last Tuesday with bondholders to discuss the proposal following a late October meeting in Caracas, according to the people. The plan is to offer up billions of barrels of oil to repay these creditors, a group that includes some of the biggest names in U.S. finance: Goldman Sachs, Pimco and T Rowe Price.

The U.S. bans business with top Venezuelan officials and government entities and a senior official says it rejects the oil-for-debt plan. “The deal would open those involved to U.S. sanctions,” Elliott Abrams, the State Department’s special representative for Venezuela, said via email.

While this public stance makes any such agreement implausible, the lawyers and lobbyists who’ve been negotiating the deal suspect a shift may be under way as opposition leader Juan Guaido’s bid to oust Maduro sputters and the Trump administration looks for alternatives. Several say they obtained government permission for their Caracas meetings.

Last month, the American security mogul Erik Prince, a Trump donor and the brother of Education Secretary Betsy DeVos, met with Maduro’s vice president, Delcy Rodriguez, to propose his own business deal, an about-face from his pitch earlier in the year to topple the regime. Prince briefed U.S. officials on his trip both before and after.

For Maduro, having to propose an oil-for-debt deal to the Americans is a painful blow. He and his socialist mentor, the late Hugo Chavez, have railed for years against the evils of U.S. capitalism. What’s more, oil has long been seen in Venezuela as the country’s crown jewel and a resource so precious that stringent restrictions on foreign involvement in the industry are laid out in the constitution. Maduro’s willingness to entertain such a proposal underscores how painful the sanctions have been and how desperate he is to have them eased.

His bid to mend relations with Washington comes as Guaido, recognized as head of state by the U.S. and some 50 countries, faces increased scrutiny. On Jan. 5, the National Assembly will vote on whether he remains its leader. His approval rating slid to a record low of 38.9% last month, according to the latest survey by Caracas pollster Datanalisis, and American officials are concerned Guaido may lose his post.

Russia is a major backer of Maduro’s, and the Trump administration’s dispute with Caracas is ideological and geo-political. But a dragged-out Venezuela crisis may pose a broader regional danger to U.S. interests. Allies including Colombia and Brazil are facing severe strains as hundreds of thousands of Venezuelan refugees cross their borders. Some form of stability under Maduro may ultimately seem preferable.

Without sign-off from the Treasury Department, it would be difficult for the Venezuelan government to make payments to bondholders, let alone to strike a deal with a major oil company. Chevron Corp. is one of the few American firms with a waiver to operate in Venezuela.

Treasury responded to a request for comment by pointing to its regulations barring business with the Venezuelan government. The Maduro government said it had no comment. Representatives for Goldman, Pimco and T Rowe Price also declined to comment.

A group representing some bondholders, the Venezuela Creditor Committee, denied knowledge of any such talks. “Neither the Committee nor its members have engaged in any discussions or negotiations with the Maduro regime or its delegates,” it said in a statement. “Moreover, to our knowledge, no proposals exist.”

For years, Maduro and Chavez defied Wall Street pessimism by continuing to service the nation’s debt. That made Venezuelan bonds one of the most profitable trades in emerging markets. But after years of economic mismanagement that led to a collapse in oil production, Maduro was ultimately forced to call for a debt restructuring in November 2017.

One by one, the government then halted payments on the bonds though no meaningful efforts to carry out the restructuring were made.

Most of the debt now fetches about 10 cents on the dollar. It wasn’t immediately clear how much money creditors could recoup in the proposed deal.