OilNOWLatest News and Information from the Oil and Gas sector in Guyana
More
FeaturedNews
Updated: June 6, 2019

More Guyanese being trained and employed in O&G industry 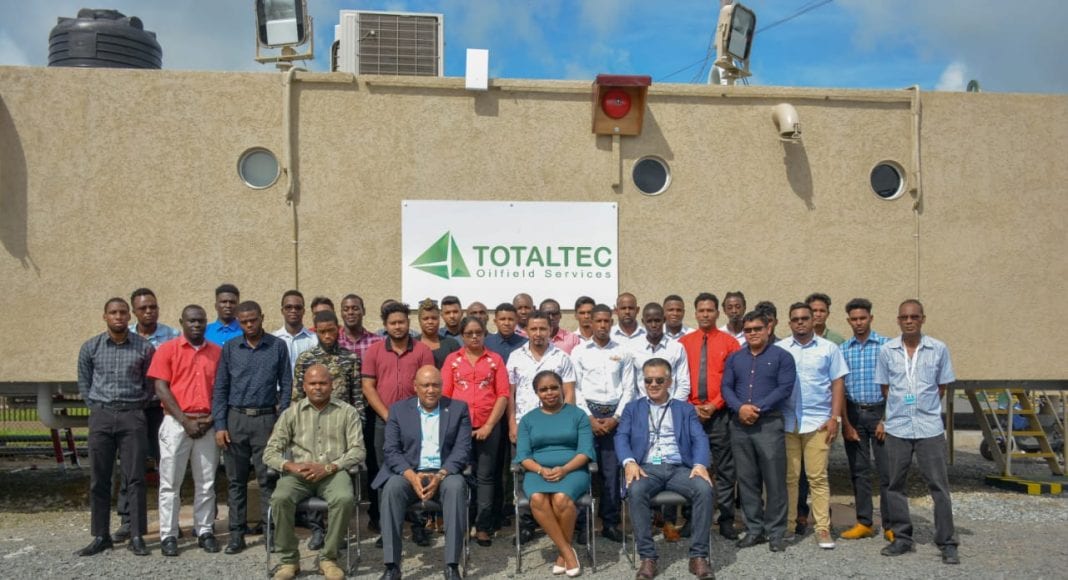 With the impending Oil and Gas industry in Guyana, a matter of great concern has been local content, and how Guyanese can benefit from the industry–not just the resource but employment and getting them ready for the employment opportunities that will arise.

On Wednesday, as a result of a partnership between TOTALTEC Oilfield Services and Guyana Shore Base Inc (GYSBI), 120 predominantly young Guyanese began their training journey to work in the industry.

Over the next four months, the group will be receiving training at the TOTALTEC Academy that is geared towards preparing them to work with GYSBI at the Houston, East Bank Demerara Shore Base.

CEO of TOTALTEC, Mr. Lars Mangal, during a brief press conference on Wednesday, June 5, stated, “This journey has been one very, very challenging journey to catalyse and create a capacity building effort that’s foundational to the Guyana Oil and Gas industry.”

Since the first batch of trainees in March 2018, Mr. Mangal said that over 100 Guyanese have received training and found meaningful employment through the academy.

“We have trained around 150 people through this academy so far in the last 12 months–some for other companies, not just our own requirements and those of our partner companies,” the CEO shared.

He explained that the current batch being trained is through a partnership with GYSBI.

“We are now embarking on a project with the Guyana Shore Base Company that’s operating right next door to this facility to recruit, train, and develop and employ 120 young Guyanese in full time employment roles within the Shore Base Company and beyond that as well as we intend to go further than the 120 that we have planned in the next four months,” he divulged.

It was indicated that GYSBI, which is contracted to provide shore base services for ExxonMobil Guyana, already employs over 200 Guyanese.

To meet the need for increased capacity building, Mr. Mangal said that TOTALTEC would be mobilising additional instructors and classroom spaces for their academy.

Addressing the trainees, he reminded them of the importance of safety in the industry, saying, “Safety is no compromise for us. You would have learned through the intensive interview process that we have gone through over the last week or so that we have a very simple approach to how we do business.”

Minister of Natural Resources, Raphael Trotman–who previously held responsibiliy for the Oil and Gas sector–commended the efforts of TOTALTEC. Minister Trotman, who is a patron of the academy, said, “I believe that there was an expectation that with the click of a finger, Guyana would be ready for petroleum but it takes time, it takes investment, it takes months and perhaps years.”

He added, “Even as the industry is about to appear before us, it will still take years to get us fully into place, so to speak. So, hearing that we’re training 120 persons in four months is really what got me here today.”