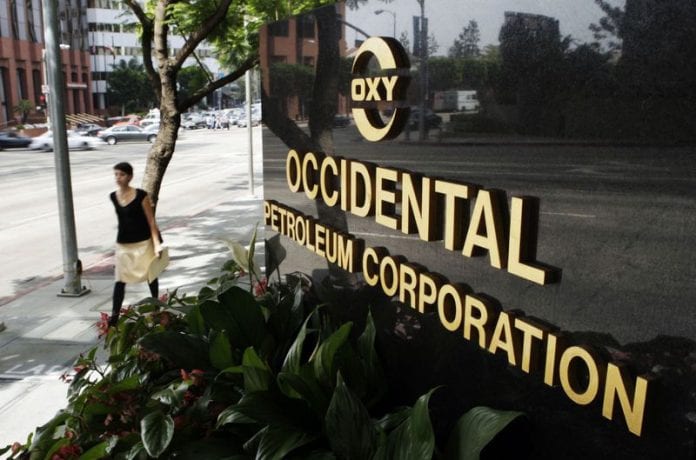 Occidental Petroleum has revised its takeover offer for fellow US company Anadarko Petroleum, offering to pay mostly cash, Upstream said in a May 6 report.

Occidental launched a $57 billion offer last month for Anadarko split 50:50 between stocks and cash, offering $38 per share in cash and 0.6094 Occidental shares for each Anadarko share, valuing Anadarko at $76 per share.

However, on Sunday Occidental offered a revised deal which still values Anadarko at $76 per share but instead offers $59 in cash and 0.2934 Occidental shares for each Anadarko share.

“This combination will create a global energy leader with the scale and geographic diversification to drive compelling returns to the shareholders of both companies.”

Occidental noted that its offer represented a 23.3% premium to the $33 billion bid tabled by US supermajor Chevron last month which valued Anadarko at $61.62 per share and would be split 25% cash and 75% stock.

Anadarko confirmed late last month that it was in talks with Occidental after it determined it was offering a potentially superior proposal to Chevron.

It its letter to Anadarko’s board on Sunday, it was revealed that during the discussions Anadarko had requested three seats on the Occidental board.

However, in the letter, Hollub stated Occidental would not be offering the board seats up as part of a deal as the company believed its new 78% cash proposal did not support the request.

Hollub also stated that the $1 billion break-up fee which would result if Anadarko walks away from the Chevron offer would be borne by Occidental once it acquired the company.

“We remain perplexed at your apparent resistance to obtaining far more value for Anadarko shareholders which has been expressed clearly through our interactions over the last week,” Hollub added in her letter to Anadarko’s board.

The revised offer came as French giant Total revealed it had struck a deal to acquire Anadarko’s African assets from Occidental for $8.8 billion, should the latter be successful in its takeover bid.

The increased offer for Anadarko comes as Occidental also revealed a fall in first quarter profits for 2019.

Occidental’s net income for the three months to 31 March totalled $631 million, down on the $708 million generated in the first quarter of 2018.

This came as lower oil and gas prices offset a rise in production, which averaged about 719,000 barrels of oil equivalent per day in the recent quarter, compared to 609,000 boepd a year ago.

This resulted in Occidental’s oil and gas operations generating about $2.35 billion in the first quarter of 2019, compared to $2.45 billion a year ago.