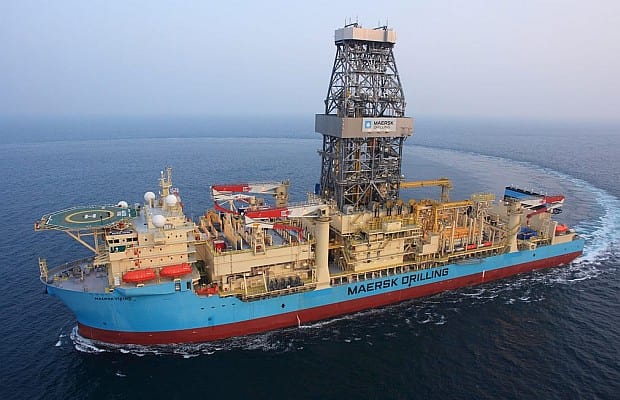 Offshore exploration and development wells are often drilled from mobile offshore drilling units (MODUs, pronounced “moe-dooz”). Depending on the water depth and remoteness of the location, these “rigs” may be jack-ups (up to 400 feet of water), or semisubmersibles, or drillships (up to 12,000 feet of water). Jack-ups are bottom-supported units; semisubmersibles and drillships are floating units (“floaters”).

In terms of numbers, jack-up rigs drill most offshore wells. Semisubmersibles run a distant second, and drillships come in third, though most of the major new discoveries today are being made by the floaters in deep and ultra-deep water. Oil companies (“operators”) select rigs that are specifically suited for a particular job, because each rig and each well has its own specifications and the rig must be matched to the well.

Jack-up rigs are so named because they are self-elevating-with three or four movable legs that can be extended (“jacked”) above or below the drilling deck, or hull. Jack-ups are towed to the drill site with the hull, which is actually a water-tight barge that floats on the water’s surface, lowered to the water level, and the legs extended above the hull. When the rig reaches the drill site, the crew jacks the legs downward through the water and into the sea floor (or onto the sea floor with mat supported jack-ups). This anchors the rig and holds the drilling deck well above the waves.

Jack-up rigs drill through slots in their hull, or have the ability to extend (“cantilever”) the drilling package out over the side of the hull. A cantilevered rig is very useful for drilling a series of wells over an established production platform, because the rig can move beside the platform and then extend the drilling package over the top of the platform to drill a sequence of development wells.

Usually, jack-ups are towed by several towboats to their drilling location. When distances are long, they are placed on heavy-lift vessels for transport.

Because of their exceptional stability, “semis” are well suited for drilling in rough waters. Semisubmersibles can drill in water as deep as 10,000 feet. Because semis lack the legs of a jack-up, they must have a means of maintaining their position over the well during drilling. This is accomplished using either an eight or 12 point anchoring (mooring) systems. In deeper waters, some semis employ dynamic positioning (DP) systems to replace or supplement the mooring system. DP systems employ computer-controlled motor-driven propellers, called “thrusters,” to adjust for the action of winds and waves. They respond automatically to satellite GPS signals coordinated with acoustic beacons placed on the sea floor.

Drillships are specially built seagoing vessels that also drill in waters as deep as 12,000 feet. Drilling equipment is installed on the deck, with the derrick normally placed in the middle of the ship. The well is drilled through an opening (called a “moon pool”) that extends to the water’s surface below the derrick.

Because of their cargo-carrying capacity and exceptional mobility, drillships are especially useful for drilling exploratory wells. Although they are not as stable as semisubmersibles in rough water, they can be moved from location to location much faster. They maintain their position through mooring or dynamic positioning systems.