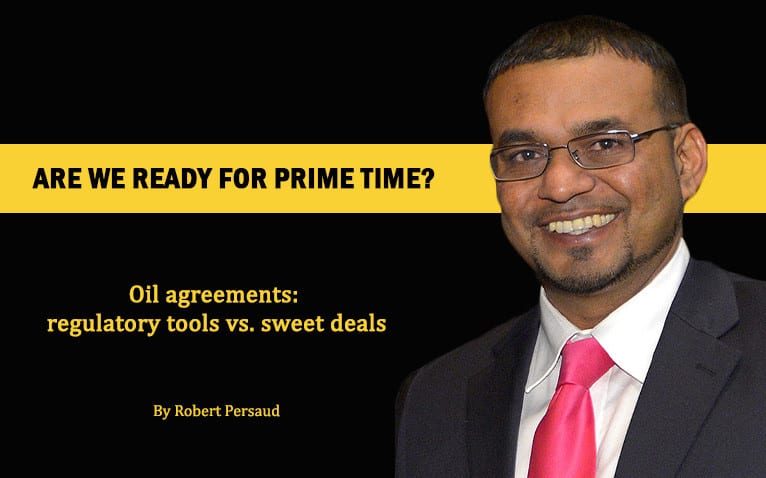 There is the misplaced belief, in some quarters of our society, that ALL licenses and agreements, which have been issued for exploration and production (E&P) of oil and gas, between past and current administrations and the International Oil Companies (IOCs) are laden with EXCESSIVE concessions and are biased in favour of those companies. Nothing could be further from the truth!

Globally, over the past decades, these agreements and licenses have moved from just commercial bilateral contracts with standard contractual provisions. A close examination of the framework shows these as more regulatory tools than just commercial documents, which are designed to impose controls and obligations over IOCs. Guyana had adopted the model, which project more of a regulatory role.

Yes, there have been countries, especially in the 1970s and 1980s, which did not bargain hard and ‘allowed’ themselves to be railroaded, thus not winning the best terms and conditions for their populations. And yes, there were instances when IOCs dominated the local political landscape of several countries, especially those which recently attained political independence from their Colonial masters and had controlling interest in several of the IOCs. Coup d’état and political instability were fomented, and the IOC representatives were as powerful as those countries’ leaders. The world has since changed.

Over the past decades, and based on the negative experiences of countries and greater international scrutiny, IOCs and host governments have had to adopt international standards and best practices, some of which are now established in conventions, stock exchange trading rules and reformed company practices. These developments led to revolutionary changes in the arrangements for not only O&G activities, but for the wider extractive industry.

A number of global extractive industry ethics and environmental watchdog bodies have joined the plethora of informal and formal oversight and review of the IOC’s operations and governments’ enforcement of agreements/licenses. These have also extended to being vigilant against corruption. (http://www.oecd.org/corruption/oecdantibriberyconvention.htm).

It might be useful to look at the internationally acceptable framework used for E&P licenses, including Production Sharing Agreements (PSAs), to have a better appreciation of their strong regulatory features.

For environmental protection, the provisions relating to E&P are guided by international best practices and approaches under obligatory provisions of the licenses. Some of these best available techniques and tested environmental practices have been introduced by the OSPAR Convention (https://www.ospar.org/convention) and are no longer at the whims and fancies of the IOCs and host governments. The Polluter Pays Principle and Precautionary Principle are also applied to reinforce this requirement. Other methods to meet environmental objectives include environmental impact assessment to ensure that the environmental impact of the new development is minimized and fully appreciated while there is strategic environmental assessment, which goes beyond the project limit/life.

Also, host governments enforce their regulatory reach by insisting on measures to be imposed on the licensee in order to meet local content objectives including local participation obligations on the license such as local workforce and procurement of goods and services.

Another feature of governmental regulatory influence is the inclusion of provisions to meet the objectives of developing the resource rapidly. There are field development requirements, as well as obligations for relinquishment of exploration blocs after a certain time. Importantly, several phases are usually set under the license such as exploration, appraisal and production, and terms with clearly-defined time-frame and proposed investment dollars for these activities.

Universally, the governments’ main objectives for pursuing PSAs are to attract foreign investment, effective resource development and increasing the share of the State’s profit. PSAs, in general, have the built-in prominence of governmental control and cannot be, singularly, emasculated by the IOC.

A key demand of any responsible government that is included in PSAs is the importance of early revenue for the country. This is normally pursued through the establishment of a cost ceiling recovery principle, which sets limit on percentage of revenue the IOC is entitled to for cost recovery. The lower the percentage of production negotiated for cost recovery, the quicker the host country will be able to gain early, decent revenue.

Another example where PSAs allow for a strong measure of governmental regulatory role is the insistence on efficient resource development, which is done to avoid premature field abandonment or risk that small or marginal fields will remain undeveloped.

Importantly, these licenses/agreements are required to contain clauses where breaches by the IOCs can lead to either revocation of the license or suspension of their oil and gas production operations.

It is important to recognize the now increasing regulatory nature of PSAs and associated agreements. As such, any country can then prioritise its focus to meet national objectives, depending on the existing economic and political situation. These agreements and licenses are usually concluded after complex negotiations with the ideal being a win-win scenario, containing flexible terms. The undeniable reality is Government’s ability, through its regulatory and statutory roles of enforcement of PSAs and E&P licenses, to become the main driver in a dual-controlled arrangement.

Back to our local situation- the Government and state agencies are obligated to, and to continue strict enforcement of the terms and conditions of licenses/agreements. Guyana’s track record has been good notwithstanding resource constraints. With oil-production starting in March 2020, it will certainly require greater participation and involvement of informed stakeholders as there will be newer and more complicated requirements on the part of IOCs in Guyana.

The writer Robert M. Persaud (robertmpersaud.com) is the Former Minister of Natural Resources and the Environment and now the Managing Consultant of Georgetown-based Ipower Consultancy. Send feedback to: [email protected]