Optimism over a swift and steady economic rebound from crushing pandemic lockdowns have helped global oil prices stage a dizzying rebound from near two-decade lows in April, S&P Global said in a report on Thursday.

Nearly all the oil demand metrics have been encouraging so far. After bottoming out in early to mid-April, global economic indicators are improving with the exception of aviation activity which remains well below seasonal norms.

Implied driving activity is already well above pre-crisis levels in both the US and Germany, Europe’s biggest economy and user of fuels.

In the week to June 5 alone, the US saw a surge in refined product demand to 17.57 million b/d, the strongest since the week ended March 27 when the first statewide lockdowns went into effect.

Market consensus has formed around an expected global oil demand slump of around 8-9 million b/d this year after a fifth, or some 20 million b/d, of demand, was wiped out by lockdowns in April.

But the so-called V-shaped recovery path —where global oil demand will continue to rise steadily to snap back to its previous trajectory by year-end —is being called into question.

One major uncertainty over oil’s recovery is how much of the world’s upended work and social behavior partners during the crisis stick even after lockdowns are lifted.

On June 9, the US’ Energy Information Administration cut its forecast for 2021 US oil demand for a second time, forecasting demand will be 1.26 million b/d lower than its pre-lockdown baseline.

Standard Chartered is even more bearish, predicting slow recoveries in jet fuel demand and diesel demand will hobble the US rebound next year.

“We think that much of the market is ignoring the downside risks to demand arising from both economic weakness and permanent changes in patterns of energy use brought on by COVID-19,” the bank’s energy analyst Emily Ashford said in a note.

Fears that the pandemic could inflict lasting damage on oil demand due to less commuting, fewer business trips and hardwired adoption of social distancing, are hard to gauge. For now, at least, most market watchers feel it is still too early to predict how behavior patterns will impact demand.

Research suggests that overall energy savings from mass homeworking are likely to be limited, and in many cases could be non-existent, according to The World Economic Forum.

The other key variable in current demand recovery forecasts is the potential for second wave of infections –and resulting return to lockdowns– if the current curbs are lifted too quickly.

Goldman Sachs this week raised its forecast for Brent crude by $6/b for the second half of 2020 to $45/b on stronger recovery data but noted risks from a bounce in global infection rates.

“The positive start to reopening does not resolve the uncertainties about a potential second wave of infections or of a more difficult recovery beyond the easier gains of the first few months,” the bank said.

While there are no signs yet that ongoing efforts to loosen curbs on mobility and business activity are fueling new cases in Europe and the US, elsewhere moves to contain the coronavirus are more mixed.

In Brazil, the situation has continued to worsen with the country’s most populous state Sao Paulo reporting a record number of COVID-19 deaths for the second day running on June 10. Chile, meanwhile, still has the highest infection rate in South America.

Even under the default, V-shaped demand scenario, a uniform return to pre-crisis demand levels is far from assured with large potential disparities between geographic and specific fuel markets.

According to forecasts by S&P Global Platts Analytics, Western Europe is set to feel the most pain in terms of oil demand impact with 13% of its oil consumption set to disappear in 2020.

The US, however, is set for the biggest loss in terms of volumes with 2.4 million b/d impacted, or 29% of the global total, according to the outlook.

In China, where the lockdown response was initially viewed as extreme, oil demand may fall just 340,000 b/d this year, according to Platts Analytics, helped by government incentives to limit fuel price falls which created an import binge during May.

In terms of oil products, US gasoline demand is by far the biggest casualty accounting for almost half of the 2.6 million b/d global impact for the key driving fuel.

It is the grounding of thousands of flights, however, that will see jet fuel take the largest hit by market share with almost a quarter of jet demand disappearing this year.

Indeed, the tail end of the demand recovery story could well be dominated by the impact from long-lasting, tighter controls on international passenger movements in addition to a reduced appetite for air travel, many believe.

Despite a relatively rapid recovery in non-commercial flights since May, S&P Platts Analytics still predicts global jet and kerosene demand will average almost 800,000 b/d lower in 2021 than 2019.

With analysts in uncharted waters to predict the new, post-COVID normal, it may be some time before market watchers can confidently call the world’s return to full health from the pandemic and with it their appetite for oil. (S&P Global) 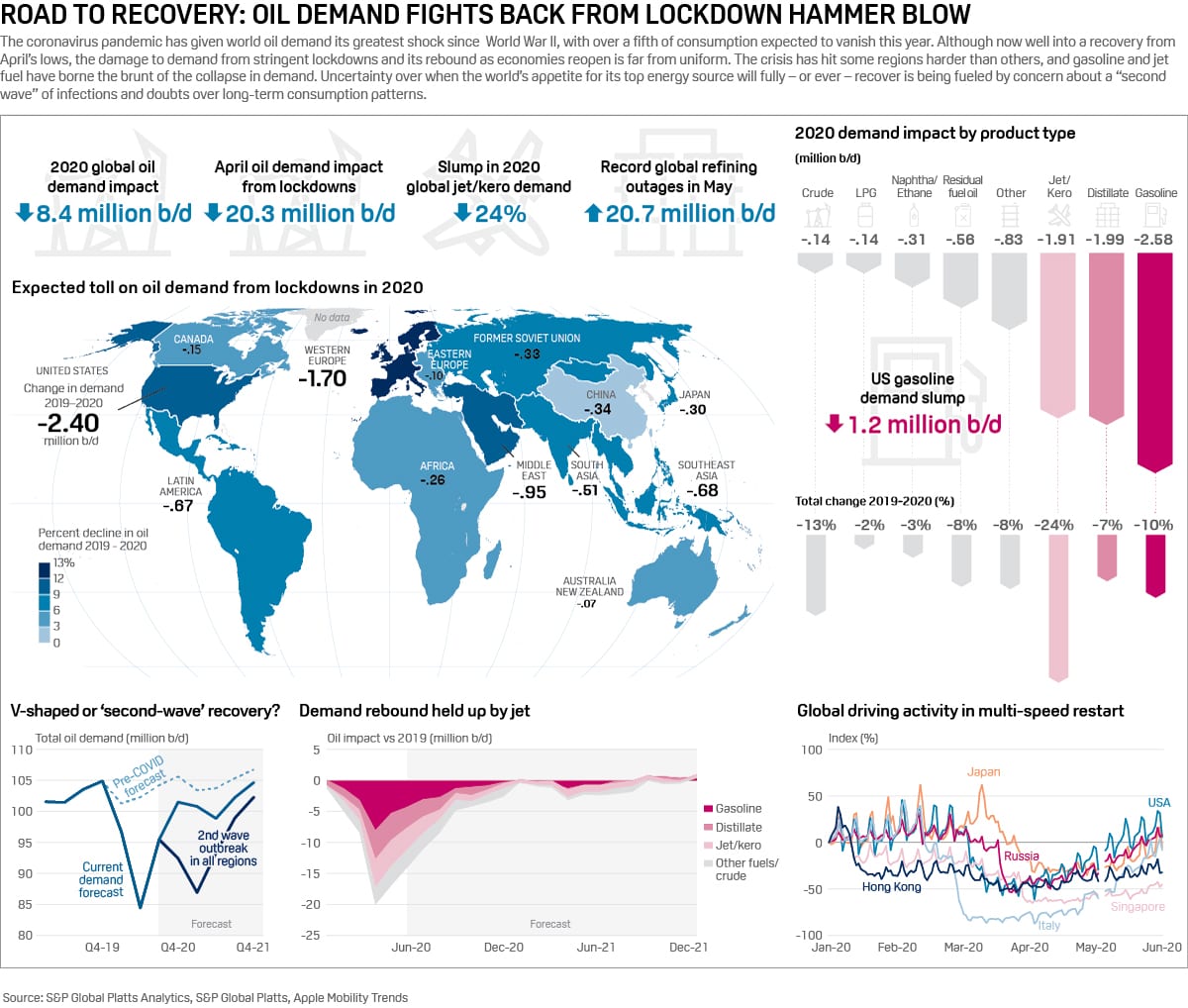 Guyanese company, Industrial Fabrications Inc. (InFab), is one of two companies that were awarded contracts from SBM Offshore in Guyana to provide fabrication services...
Read more