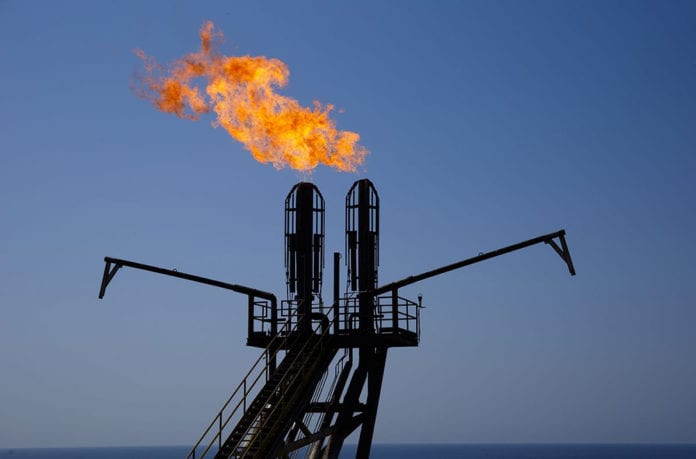 (Bloomberg) Oil extended its dramatic surge above $70 a barrel as the fallout between the U.S. and Iran escalated after the assassination of one of the Islamic Republic’s most powerful generals.

Futures jumped by another 3% on Monday as the U.S. State Department warned of a “heightened risk” of missile attacks near military bases and energy facilities in Saudi Arabia. Prices got a further boost as President Donald Trump reiterated threats of retaliation should Iran “do anything” and vowed heavy sanctions against Iraq if American troops are forced to leave OPEC’s second-biggest producer.

The wild ride continues for oil as Washington and Tehran trade bellicose rhetoric, ratcheting up fears of a wider conflict that could disrupt supply from the world’s most important producing region. Crude was last this high when Saudi production facilities were attacked in September, knocking out about 5% of global output.

Trump said he’s prepared to strike “in a disproportionate manner” and attack more than 50 sites if Tehran retaliates against the killing of General Qassem Soleimani. The Middle East nation said it has to “settle a score with the U.S.” and that it would no longer abide by limits on its enrichment of uranium. A vote by Iraq’s parliament to expel U.S. troops from the country deepened the fallout.

“Crude has some more risk pricing to do,” said Bob McNally, president of Rapidan Energy Group in Bethesda, Maryland, adding that he expected Iran to attack oil vessels and facilities in response. “We are going to grind through the $70s up towards $80 Brent as Iran calibrates and executes its retaliation,” the former oil official at the White House under President George W. Bush said in a Bloomberg TV interview.

The deepening crisis continued to spill over into other markets. Asian equities from Japan to Hong Kong fell while U.S. and European stock futures retreated. Gold surged to the highest in more than six years and Treasury yields ticked lower as investors sought havens from the turmoil.

Saudi Arabia, Iran and Iraq together pumped more than 16 million barrels of oil a day last month. Most of their exports leave the Persian Gulf through the Strait of Hormuz, a narrow waterway that Iran has repeatedly threatened to shut down if there’s a war.

The U.S. said there’s risk of attacks particularly in the eastern province of Saudi Arabia and near the Yemeni border and close to military bases as well as oil and gas facilities, the State Department said in a tweet.

In a separate event, an American service member and two contractors were killed in a Sunday attack on U.S. counter-terror forces in Kenya, with al-Qaeda-linked al-Shabaab militants claiming responsibility for the act. The raid came after a U.S. airstrike killed several members of the Somalia-based group, even as more troops are being dispatched to the Middle East.

Rising tensions between the U.S and Iran have already caused unprecedented disruptions to oil markets, but so far, they’ve been short-lived. Last year, Washington blamed Tehran for sabotage attacks on supertankers and a missile and drone attack on Saudi Arabia’s Abqaiq crude-processing plant in September — the largest single supply halt in the industry’s history.

Trump’s tough talk followed Iran’s threat of a protracted response and eclipsed a previous assertion that the U.S. hadn’t launched the attack near Baghdad airport on Thursday to “start a war.” The president is also sending more troops to the Middle East.

The Iranian leadership has signaled it will probably target U.S. military installations and bases in the Middle East and mobilize its network of militias across the region.

Beyond crude’s rise, there were other signals in the market that people were preparing for further disruption.

Volatility has risen to its highest level in a month and the cost of derivatives that insure against price spikes increased. Four million barrels of options contracts that would profit from a jump in Brent crude to $95 a barrel traded for both March and September. The cost of insuring tankers could rise again, after it surged in the wake of the Abqaiq attack in September.

Still, oil’s 23% rise last year could already have taken it to levels that may not leave much room for further increase, according to analysts.

Goldman Sachs Group Inc. said an actual disruption to global supplies is needed to keep prices are current levels. They were already trading above the bank’s fundamental fair value of $63 prior to the attack, buoyed by an “over-enthusiastic December risk-on rally” without evidence of an acceleration in global growth, the bank’s analysts wrote in an emailed note.

“The oil market always assumes the worst, so a lot of the general risk is already priced in,” said Jaafar Altaie, managing director of Abu Dhabi-based consultant Manaar Group. “Prices at $70 a barrel already assume the worst-case scenario and we see them holding there, in a range from $60-$70, for the first quarter.”

The greatest risk to supply would be an attack on Iraq’s southern fields, he said. Iran would likely continue to target tankers and energy infrastructure in the region as it’s accused of having done in recent months, Christof Ruehl, a researcher on energy and policy at both Columbia and Harvard universities, said on Bloomberg television Sunday.

“They’re walking a tight rope” and face retaliation if they react too forcefully, Ruehl said.