OilNOWLatest News and Information from the Oil and Gas sector in Guyana
More
FeaturedNews
Updated: April 1, 2022 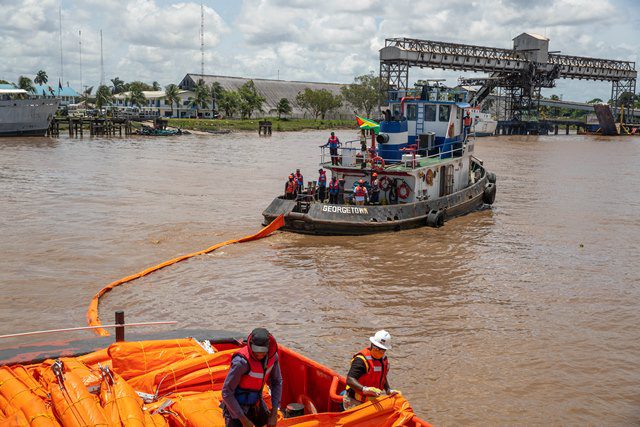 Authorities in Guyana simulated a tier two oil spill on Wednesday as it tested its national response mechanisms. A tier two response involves the mobilization of national and regional resources to respond – one notch above tier one, the least worrisome category of spills.

The response exercise is the culmination of trainings and workshops ongoing since September 2021, as part of the National Oil Spill Response effort led by the Civil Defence Commission (CDC).

The response was three-pronged, with the Pegasus Hotel in Kingston, Georgetown established as the command post, and sectional posts at the Guyana Defence Force Coast Guard and the Marriott Shoreline.

The final aspect of the exercise occurred on Thursday, with an interrogation of all phases of the exercise to identify gaps and lessons to allow for strengthened responses in the future.

Guyana’s Prime Minister, retired Brigadier Mark Phillips, visited the command centre on Wednesday. He said he recognizes the need for adequate resources to combat the hazard of an oil spill, however unlikely, and that the government would ensure all materials and personnel are in place for the unlikely event.

“From government side, I want to commit ourselves to working with you and to acquire the equipment that will be needed for the actual disaster,” Phillips said.

“The fact is that we as a country have been using petroleum for over 200 years now and therefore, we should have been ready for dealing with these types of disasters since then. We are moving fuel to keep electricity on, we are moving fuel to keep our cars moving and therefore, we can have a disaster in any one of our harbours and we have to be ready to deal with it,” he said.

As oil production began offshore Guyana, authorities moved to develop oil spill response mechanisms. Currently, two developments are ongoing in the ExxonMobil-operated Stabroek Block. The US oil major has assured that an oil spill is very unlikely. But in the event that it does occur, ExxonMobil Guyana President, Alistair Routledge said the company is prepared to respond and mitigate its effects.

Exxon affiliate, Esso Exploration and Production Guyana Limited (EEPGL), is currently in discussions with the government on the finalisation of a US$2 billion package of affiliate guarantees.