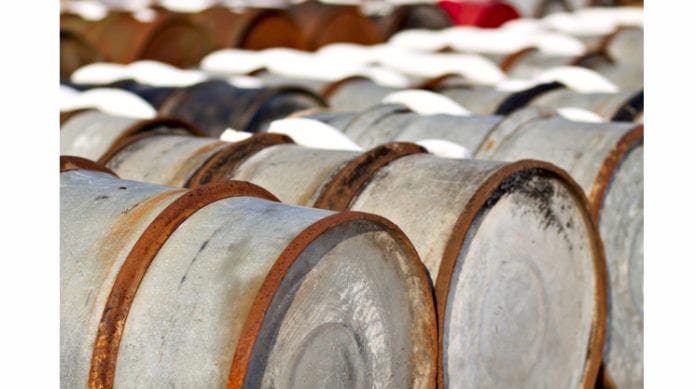 (Bloomberg Opinion) — Oil succumbed to the coronavirus this week because its immune system was compromised already. Amid headlines about quarantined Chinese cities and dozens of potential cases showing up in the U.S., Brent crude closed on Friday at $60 and change, its lowest since Halloween. This is all the more remarkable when you consider January has seen  several geopolitical shocks stretching from Libya to Iraq.

Like the outbreak itself, oil’s problems began in December with a fever of its own. Relief at a sudden truce in the U.S.-China trade war sparked a rally taking oil from about $62 a barrel close to $70 by the end of that month. Speculators, in retreat for much of 2019, suddenly piled in again. Hedge funds’ net length in the major crude and product contracts surged from less than 600 million barrels-equivalent to almost 900 million between early December and early January. On a rolling four-week basis, December saw the sharpest increase in long positions in my entire data series going back to the start of 2011 (and net length increased at its fastest rate in more than two years).

You’ll notice the fever began to break a little earlier this month. Friday’s report from the Commodity Futures Trading Commission showed net length dropped by 63 million barrels-equivalent, or 7%, in the two weeks after January 7.

But the way the fever subsided revealed continuing vulnerability. After all, prices dropped even as the killing of Iranian military leader Qassem Soleimani threatened to unleash chaos in one of the world’s biggest oil-producing countries, Iraq, and Libya’s tensions flared up again, blocking its oil exports. And this comes mere months after the collective shrugging-off of September’s attack on Saudi Arabia’s Abqaiq oil-processing facility. Besides fever, listlessness is also the hallmark of a sick patient.

So why has the oil market reacted strongly in response to coronavirus reports but not in the other direction when rockets are exploding in the Middle East?

There is likely a technical factor at play. Energy economist Phil Verleger points out oil producers such as Occidental Petroleum Corp. took advantage of the speculative rally to hedge their 2020 output. You can see this in the roughly 140 million barrel-equivalent expansion of swap dealers’ net short position in Nymex light sweet crude between early December and early January, a proxy for hedging activity by producers. As oil prices decline, particularly toward such key levels as $60 in Brent and $55 in WTI, so the banks that wrote the puts sell futures to manage their own exposure — a self-reinforcing spiral similar to what appeared to happen in the oil rout that closed out 2018.

Underlying this is the basic problem that has dogged the oil market for five years: excess supply and inventories relative to demand. The continuing OPEC+ cuts that got everyone excited back in 2016 are the surest sign of this chronic condition; but there are others, such as unusually subdued U.S. gasoline demand.

No one can accurately quantify what impact the coronavirus outbreak will have on oil prices. Novel diseases can ultimately amount to little or spark pandemics, with much in between. And the impact on oil demand, at least in the near term, has more to do with perceptions of infectiousness and what that does to travel and regular interaction rather than fatalities per se.

Oil traders are as much in the dark on the ultimate course of this as anyone. Meanwhile, on the supply side, they know there is spare capacity, a demonstrated Saudi pledge to maintain supply even if bombed and a U.S. fracking industry that is bowed but, if goaded enough price-wise, tends to produce more rather than less. In other words, the ceiling is in sharper focus than the floor right now.

‘Big uncertainty’ over US oil output in 2020 will be critically...

Global oil stocks to pile up as proposed OPEC cuts are...