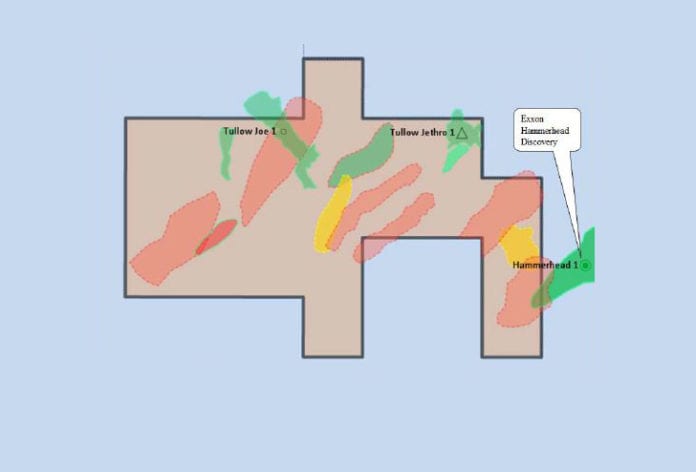 While analysis of Tullow Oil’s recent discoveries at the Orinduik Block offshore Guyana has proven to be disappointing, the Joint Venture Partners remain confident of prospects offshore the South American country and will be updating their modelling to guide the 2020 drilling campaign.

Tullow (operator – 60%) announced two oil discoveries in Guyana at the Jethro-1 well and the Joe-1 well on its Orinduik licence in August and September. The Jethro-1 well discovered 55 metres of net pay in high-quality sandstone reservoir in the Lower Tertiary and Joe-1 encountered 14 metres of net pay, opening a new play in the Upper Tertiary. Tullow said on Wednesday oil samples were sent for laboratory analysis and results indicate that the oils recovered from both Jethro-1 and Joe-1 are heavy crudes, with high sulphur content.

“The commerciality of both discoveries is still being assessed and our options are being reviewed,” Tullow spokesman George Cazenove said Wednesday.

The company said in a statement it remains confident of the potential across the multiple prospects in both the Cretaceous and Tertiary throughout the large Orinduik and Kanuku blocks.

“While the results from the Jethro and Joe wells in the far north of our acreage continue to be evaluated, the petroleum system models are being updated in pursuit of additional prospects and lighter oil in the area and, together with the Carapa well result, these will inform the 2020 drilling campaign,” Tullow said.

Meanwhile Eco Atlantic Oil & Gas Ltd (15% working interest) CEO, Gil Holzman, remains upbeat about prospects at Orinduik saying on Wednesday that other ingredients of the reservoir are positive. “We did look at other ingredients of the reservoir and they are all very positive. The porosity and permeability are high and there’s an overpressure at the hole and the temperature is quite high. That suggested the oil is mobile.”

Holzman said while the quality of the crude is challenging, “It’s good that we have oil. The alternative was to drill two wells and to have dusters. We have oil that proves the entire play, that proves the petroleum system exists on the block…,” he stated.

He said what the Joint Venture Partners have learnt so far is that the positive ingredients of the reservoir suggest that there are nine development scenarios that “make Jethro producible” although the CAPEX would be higher than a development scenario with lighter crude.