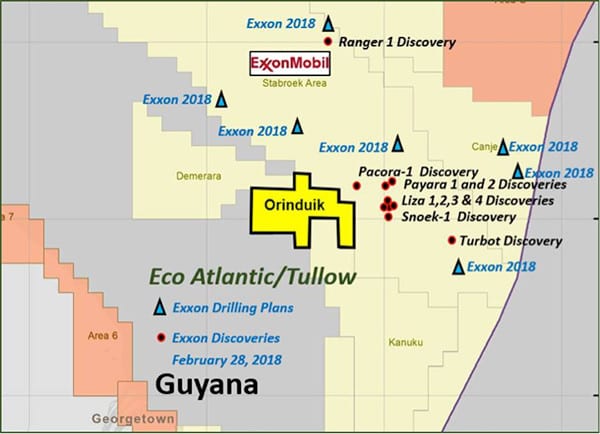 ExxonMobil’s 7th oil discovery off the coast of Guyana at the Pacora reservoir has further emboldened joint venture partners down dip in the Orinduik block. Eco Guyana holds a 40% working interest alongside Tullow Oil (60%) in the 1,800 km2 Orinduik Block. Total E&P Activités Pétrolières, (a wholly owned subsidiary of Total SA) has an option to acquire a 25% Working Interest for US$12.5 million.

Pacora-1 encountered approximately 65 feet (20 metres) of high-quality, oil-bearing sandstone reservoir located seven kilometres west of the Payara 1 Discovery.  This is directly down dip of the Orinduik Block and follows Exxon’s previous discoveries on the Stabroek block at Liza 1 and Liza 2, Payara, Liza Deep, Snoek, Turbot 1 and the Ranger 1 well locations.

“Critically these discovery wells sit down dip from the Eco / Tullow block,” commented Gil Holzman, CEO of Eco Atlantic. He added, “These thick sand pathways are defining a migration and a charge of this high-quality sand with hydrocarbons. Our technical team is working carefully and conservatively to define the resources within Orinduik. With experts from Total, Tullow, Gustavson, Eco and Kinley all interpreting the processed data as it becomes available; we are building confidence in the world class potential of this block.”

The company said last year that it was pursuing at least two significant reservoir leads on the Orinduik block which may hold significant oil comparable to ExxonMobil’s world class discoveries. The more than 3.2 billion barrels of oil already discovered by Exxon in the Stabroek Block has served to renew the optimism of other companies such as Eco Atlantic.

“This Pacora discovery is very close to our border and has added a new and significantly important dimension to our prospectivity,” Mr. Holzman stated.