OilNOWLatest News and Information from the Oil and Gas sector in Guyana
More
ExplorationFeaturedNews
Updated: January 27, 2020 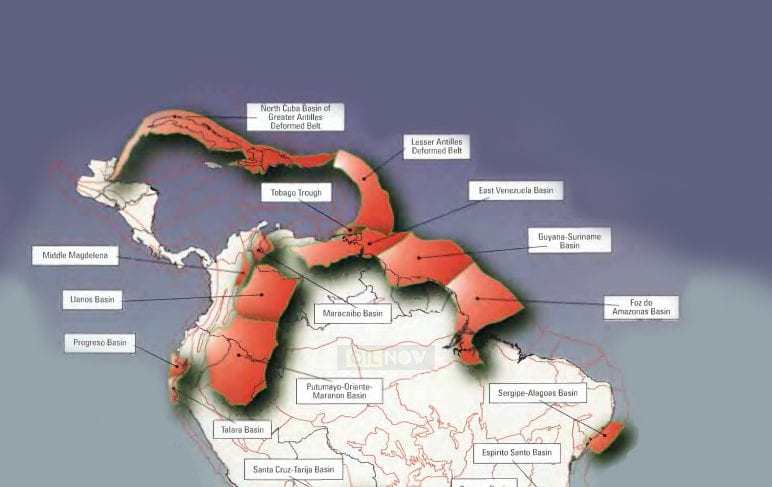 The presence of giant oil and gas fields in South America, stretching all the way from the Santos basin in the south to the Guyana-Suriname basin to the north, have long been known, with estimates of tens of billions of barrels of oil and trillions of cubic feet of natural gas.

The United States Geological Survey (UGSS) has said the South and Central America region ranked third in the world for undiscovered oil and gas behind the Middle East and the former Soviet Union. USGS estimates that the potential for giant oil and gas fields is greatest in the provinces along the Atlantic margin of eastern South America, from the Santos Basin in the south to the Guyana-Suriname Basin in the north. The potential for giant fields is mainly offshore, in water depths up to 3,600 m, USGS has said.

UK-based industry analyst Wood Mackenzie says nearly 36 billion barrels of oil equivalent have been discovered in the Santos basin as of 2019, the vast majority of which was found in the last ten years.

“The Lula oil find in 2006 was the first of several giants that confirmed the Early Cretaceous pre-salt to be the world’s largest new oil play of recent years,” WoodMac states.

ExxonMobil’s giant Liza discovery off the coast of Guyana in 2015 then confirmed that a working petroleum system extended across the Atlantic margin. Since that time, this has been further reinforced with multiple discoveries offshore Guyana at the prolific Stabroek Block, and recently, the first deepwater discovery offshore Suriname at Block 58.

Even with the more than 6 billion barrels of oil equivalent found so far at Stabroek Block, yet-to-be discovered resources in the Guyana-Suriname basin are still estimated to be in the billions of barrels for oil and trillions of cubic feet for natural gas.

WoodMac points out that the Guyana discoveries are a game changer for the country and the Stabroek Block partners – ExxonMobil (operator 45%), Hess (30%) and CNOOC (25%).

“ExxonMobil has in the Liza Complex one of its five key growth pillars and the project helps to address the major’s relative lack of deepwater exposure. For Hess, Guyana growth will supplement its key Bakken position. At peak output in 2026, the project accounts for 30% of total company production. CNOOC is the leading Chinese NOC exploring offshore Latin America, with exposure to Mexico, Guyana, Argentina and Brazil. On its international portfolio, Guyana is the NOC’s second largest country in terms of value and reserves,” WoodMac says.

Oil production started in Guyana on December 20, 2019. The Liza Phase 1 Development marks a turning point for the small South American county where Rystad Energy estimates more than a million barrels of oil will be produced per day by the end of the decade.

Meanwhile, exploration continues to be intensified offshore both Guyana and Suriname, turning the once quiet basin into a production hub potentially rivalling the US Gulf of Mexico, in coming years.