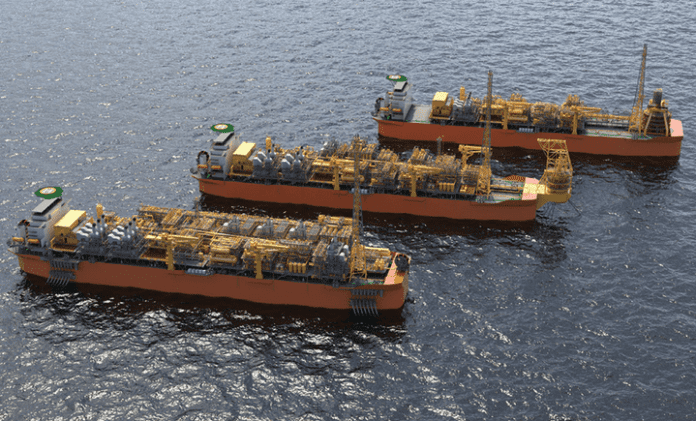 With the gross recoverable resource estimate now above 8 billion barrels of oil equivalent at the Stabroek Block, co-venturers ExxonMobil, Hess and CNOOC are analysing data and assessing development needs that would help determine the number of floating production storage and offloading (FPSOs) units needed in coming years.

ExxonMobil, operator at the 6.6 million acres Stabroek Block, has said the co-ventures are looking at around 5 FPSOs operating by 2025 producing upwards of 750,000 bpd.

Speaking on Hess Corporation’s Q4 earnings call last week, Bank of America’s Doug Leggate reminded that Hammerhead has been passed on to the development team with the potential capacity of a 140,000-bpd vessel requirement, and appraisal activities continue on the eastern seaboard between Turbot and Liza. “…how many vessels will it take to evacuate all of that oil, which is substantial along that eastern seaboard?” he asked.

Greg Hill, President and Chief Operating Officer at Hess Corporation in response said, “…all of the appraisal activities that are ongoing; really what I call on the eastern seaboard between Turbot and Liza, are really trying to understand how many vessels will it take to evacuate all of that oil, which is substantial along that eastern seaboard.”

Hill said from all indications the 5th FPSO will be positioned on the eastern seaboard between Turbot and Liza “and probably several vessels after that, but we’re trying to figure all that out.”

He said the 5th FPSO will be a large unit in the class of the 220,000 bpd Liza Unity currently being built by SBM Offshore for Phase 2 of the Liza Development.

“But specific timing of the number of vessels and timing of the ones after five, that’s really what we’re working on. And that’s kind of the heavy lift for this year,” Hill stated.

Worst oil demand contraction ever recorded in the making

Multiple play types with an 87% success rate make Guyana a...