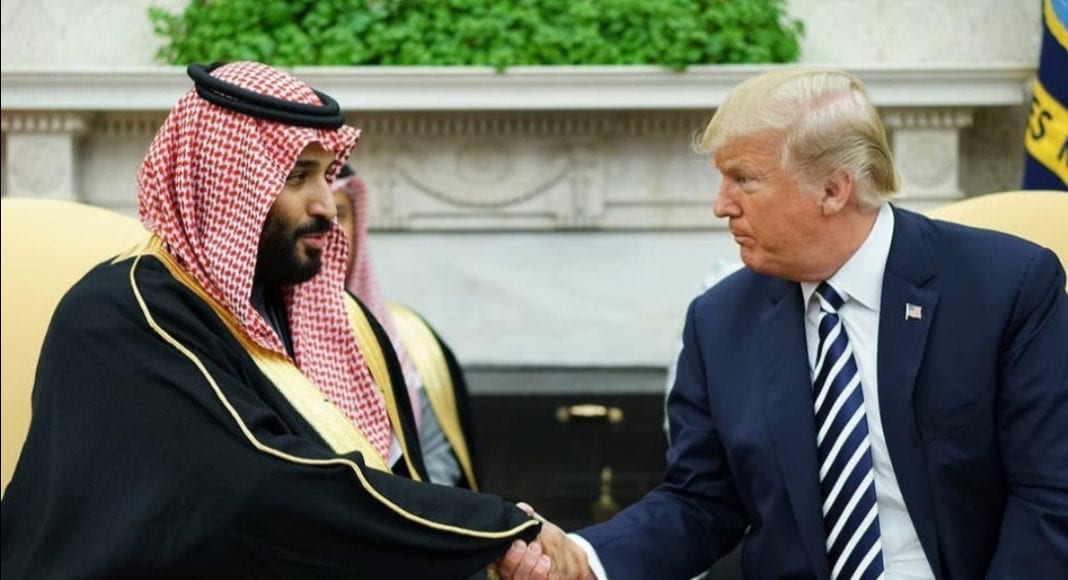 (Bloomberg) Saudi Arabia showed no sign of bowing to pressure from U.S. President Donald Trump to dial back its oil-price war with Russia. Instead, the kingdom pushed crude supply to record levels.

Trump said Tuesday night that he’d spoken to both President Vladimir Putin and Crown Prince Mohammed bin Salman in an effort to broker a truce between the world’s two largest oil exporters. While Russia made some conciliatory noises, Saudi Arabia showed nothing but defiance.

The kingdom started the month by boosting supply to more than 12 million barrels a day, the most ever, according to an industry official familiar with the kingdom’s operations. In an apparent show of force, Aramco was loading a record 15 tankers with 18.8 million barrels of oil on a single day earlier this week, according to another official and a tweet from the company.

That social media post, boasting how the kingdom will “rise to supply energy,” appeared to be a riposte to U.S. Secretary State Michael Pompeo, who last week urged the Saudis to “rise to the occasion” by dialing back their plan to flood the market.

So far, Riyadh has insisted that it will only back away from a decision to flood the global market if all the world’s leading producers — including the U.S. — agree to cut output. Russia has struck a more conciliatory tone, saying it would hold back from a major production increase, but hasn’t offered any concrete proposals to end hostilities with its former OPEC+ ally.

Trump’s decision to wade into oil diplomacy is driven by the catastrophic impact of the price crash on the American shale industry, largely based in Texas and other Republican-leaning states. But his mission to rein in global supply is overshadowed by the unprecedented loss of demand — possibly as much as 30% — caused by the fight against the coronavirus.

“Signs of policy discussions are multiplying, and we believe such an outcome should no longer be dismissed,” analysts at Goldman Sachs Group Inc. said in a note. Even so, after such a huge drop in consumption it’s questionable “whether policy coordination by OPEC+, the U.S., and oil producers more broadly can save this market.”

A senior Russian official said that while they hadn’t spoken to Saudi Arabia yet, Moscow had no plans to increase production given the current market situation. He gave no indication that Russia was willing to consider output cuts, however. It was Russia’s refusal to join Saudi Arabia and other members of the Organization of Petroleum Exporting Countries in deeper reductions that kicked off the price war in early March.

“The Russian side traditionally welcomes mutual dialog and cooperation in order to stabilize energy markets,” Kremlin spokesman Dmitry Peskov told reporters on conference call on Tuesday. Putin has no immediate plans to speak with the Saudi king or crown prince, but such contacts can be easily arranged, he said.

World oil demand, normally around 100 million barrels a day, will likely be down by 30 millions barrels a day in April and has yet to bottom out as lockdowns due to the virus continue, Chris Bake, an executive committee member at trader Vitol said on Tuesday.

“The sharp drop of oil prices has made the bulk of new Russian oil drilling uneconomic, the industry will need to look for ways to optimize” output, said Darya Kozlova, head of oil and gas regulation services at Moscow-based Vygon Consulting.

However, even if production is flat, Russia may hike its oil exports to offset falling domestic demand for crude as its own economy goes into shutdown to slow the spread of the coronavirus, Kozlova said.

On Tuesday evening in Washington, Trump said the U.S. would meet with Saudi Arabia and Russia with the goal of staunching the historic plunge in oil prices and has raised the issue directly with the countries’ rulers.

U.S. Energy Secretary Dan Brouillette had a “productive discussion” with Novak on Tuesday and agreed to “continue dialog among major energy producers and consumers, including through the G20,” the Department of Energy said in a statement. The two men agreed that an oil oversupply hurts the global economy, the Russian Energy Ministry said separately.

Neither side detailed any steps they are considering to stem the downturn.