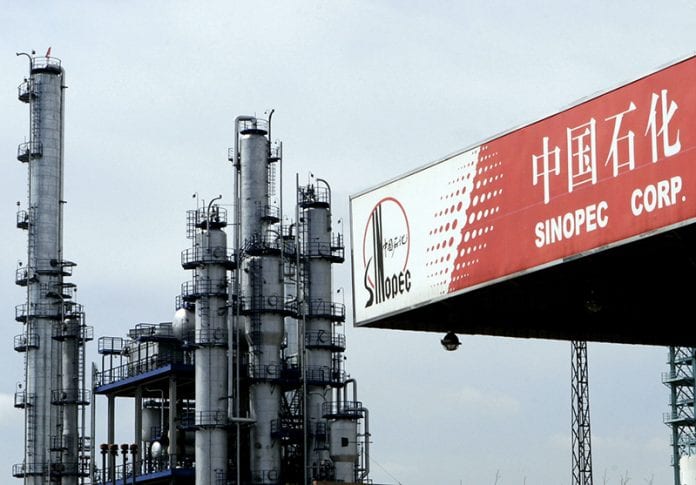 (Reuters) – China Petroleum & Chemical Corp, the country’s largest refiner, reported its best quarterly profit in years on strong upstream and refining business and said it expects higher fuel sales in the second half.

Known as Sinopec, the company said in a statement late on Sunday that first-half net income was 41.6 billion yuan ($6.05 billion), up 54 percent from the same period a year earlier. That topped its own forecast of 50 percent profit growth, issued late in July.

The company doesn’t give a breakdown for second-quarter results. But according to Reuters calculations based on Sinopec’s first-quarter earnings, April-June net income climbed to 22.8 billion yuan from 18.8 billion yuan in the first three months of the year, the highest since at least the start of 2013.

The stronger earnings came after oil topped $80 a barrel in May for the first time since 2014, boosted by OPEC-led output cuts and falling Venezuelan and Libyan output, as well as by an imminent drop in Iranian exports as U.S. sanctions return.

The company’s shares in Hong Kong were up 1.7 percent in early trade at HK$7.65, while the exchange benchmark index was up 1.3 percent.

Total revenue in the first six months of the year rose to 1.3 trillion yuan, up 12 percent from a year earlier, amid higher crude prices, rising natural gas production and stronger fuel margins, the statement said.

Second-quarter revenue was 679 billion yuan, according to Reuters calculations.

Still, Sinopec warned on Sunday processing rates for crude to stay flat in the second half of 2018, amid an oversupply of refined fuels.

“Sinopec ramped up efforts to sell fuel in domestic market by giving a discount especially for diesel in the second quarter. The discounts have boosted sales volume but hurt revenue,” Eyebright Securities said in a research note last week after the company gave a results forecast.

Sinopec will produce 146 million barrels of crude oil in the second half of 2018, it said.

Refined product sales in the first half were down 2.1 percent from the same period a year earlier.

China will determine the future of Venezuela

Juan Guaido: Why China should switch sides in Venezuela