OilNOWLatest News and Information from the Oil and Gas sector in Guyana
More
FeaturedNewsRegional
Updated: November 17, 2020 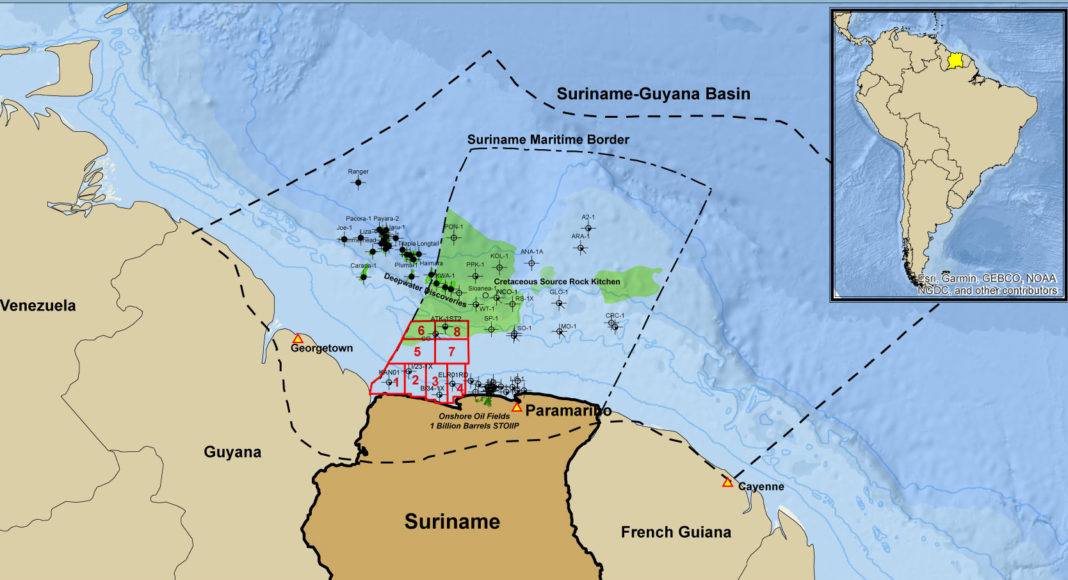 Eight blocks covering an area of over 13,524 km2 of underexplored but highly prospective acreage in the western part of the Suriname offshore basin went on offer on Monday by Staatsolie Maatschappij Suriname N.V.

According to bid documents seen by OilNOW, the acreage lies directly in the migration pathway between the giant onshore producing fields and the recent deepwater discoveries at Block 58, which are both typed to the Albian, Cenomanian & Turonian (ACT) source kitchen. The acreage on offer lies directly in the migration pathway up-dip from the proven and highly productive Cretaceous ACT depocentre and source kitchen.

“I am excited to announce that Staatsolie Hydrocarbon Institute N.V. has started the offering of eight new blocks in Suriname’s shallow offshore,” said Rudolf Elias, CEO of Staatsolie, in a comment on LinkedIn. “We are welcoming bids until 30 April 2021.”

Global acquisition and divestment advisor Envoi has been commissioned by Staatsolie as Advisor to the Shallow Offshore (SHO) Bid Round.

Staatsolie is now inviting international and national oil companies to bid for the blocks on offer based on acquisition of new 3D seismic data in the 1st exploration phase with a drill-or-drop decision before drilling in subsequent phases.

The documents state that the oil that is being produced from the existing Tambaredjo and Calcutta oilfields onshore Suriname has been typed to the deep water ACT source rocks and can only have migrated through the largely undrilled shallow water acreage being offered in the SHO Bid Round.

“This is also confirmed by numerous shows in many other onshore and shallow water wells from the western to eastern borders of the country,” the bid documents outline.

Other than a small existing 3D on the shelf edge in the western part of the SHO acreage, the bid round area is covered by a sparse grid of 2D seismic data and has seen only 6 historical wells drilled. The SHO bid acreage is therefore considered underexplored, although all of the wells encountered hydrocarbons. Of these wells, AKT-2, drilled near the shelf edge, encountered a 205m interval of shows in the Santonian equivalent to the deep-water discoveries, and another 87m of shows in the Albian.

According to Staatsolie, the new blocks will be awarded under the terms of the petroleum legislation which governs the exploration, appraisal, development and production of hydrocarbons within Suriname.