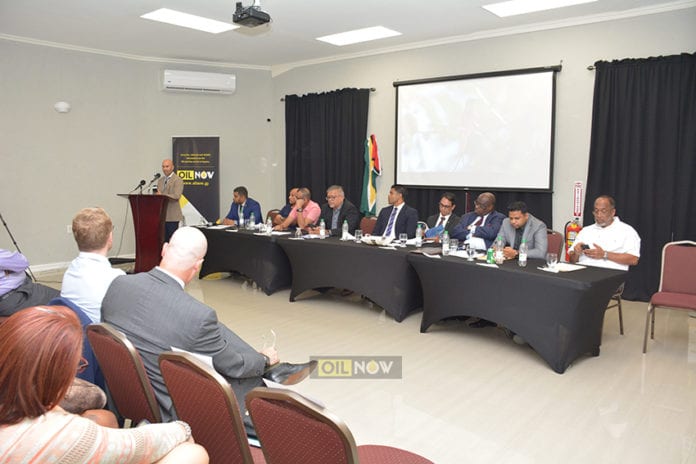 The Georgetown Chamber of Commerce and Industry (GCCI), on Wednesday, hosted a Roundtable Discussion on Guyana’s third draft of the Local Content Policy. The event saw an exchange of several different viewpoints on the strengths and weaknesses of the latest draft. One of the points raised during the discussion was the need for a more specific definition of what constitutes a local business.

During his presentation, President of GCCI Nicholas Deygoo-Boyer noted that the third draft of the policy is an improvement over the previous two, notwithstanding several flaws in terms of how to define a local business. Despite this, Boyer explained that local companies are already starting to embrace the standards multinational corporations expect.

Even though certain companies are adopting international standards and practices, Professor of Business and Dean of the School of Entrepreneurship and Business Innovation at the University of Guyana, Dr. Leyland Lucas recognized that serious inefficiencies still exist within the workforce. He attributes much of this to the fact that for decades Guyana has suffered from high rates of migration of skilled persons, a phenomenon commonly referred to as “brain drain.” With this in mind, Dr. Lucas believes it’s possible that the definition of local companies may need to be expanded to include members of the diaspora to ensure that Guyana is able to maximize benefits for the nation while maintaining the standards expected by international companies.

“The definition of local content cannot ignore the diaspora. Not only in terms of bringing those competencies and capabilities back, but also in terms of how do we define a local business? How do we define that business that is considered meeting the expectations of local content, without taking into consideration where it exists?” Dr. Lucas asked.

He further added, “… we have to expand our definition to take into consideration members of the diaspora. And because we have this wonderful thing called the virtual world, local businesses may not have to be considered as actually being physically in Guyana. How do we deal with issues of fronting? How do we develop joint ventures? And, in developing joint ventures, what percentages do we put in place to suggest that this is considered part of local content strategy?”

Also speaking at the forum, immediate past-President of GCCI Deodat Indar disagreed with the Professor to an extent. While they both agree on the need for local content and its implementation; Indar believes that the definition for local content needs to be more narrowly defined as the current draft of the policy only requires 51% Guyanese ownership to be considered local.

The third draft of the Local Content Policy gives the definition of Guyanese-Owned, Registered in Guyana as “a supplier or sub-contractor company that has fifty-one percent or greater of its share capital owned by Guyanese Citizens, and is registered in Guyana with the Guyana Tax Authority, and where the offices, plant or facilities of the company that relate to the supply, distribution or manufacture of goods or the provision of services for petroleum operations in Guyana are located in Guyana.”