OilNOWLatest News and Information from the Oil and Gas sector in Guyana
More
FeaturedNews
Updated: March 20, 2020 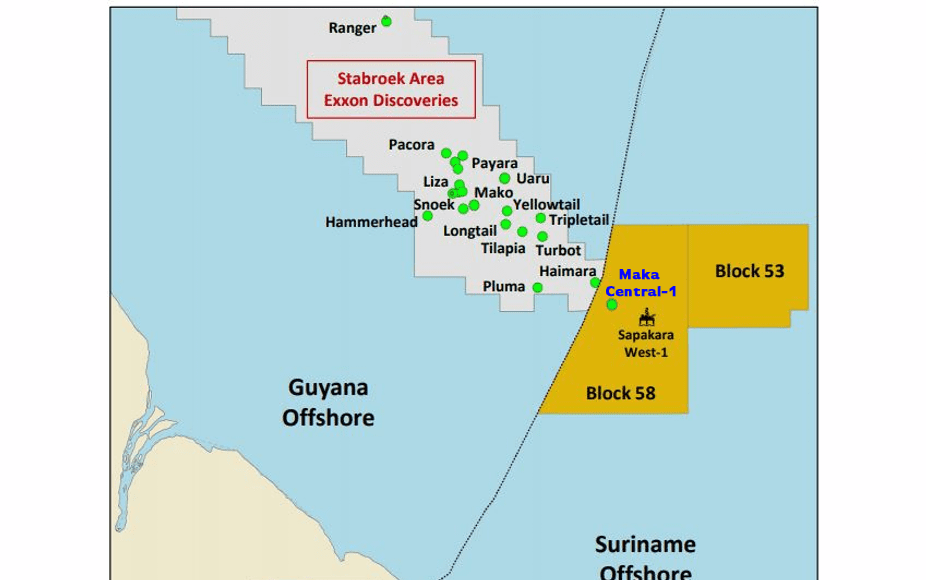 The Maka Central-1 discovery has the potential to bring more than US$50m in revenue per year to the Surinamese Government if it sees similar success to Guyana’s Stabroek, according to leading data and analytics company GlobalData.

Gregory Bosunga, Oil and Gas Analyst at GlobalData, said due to a lack of onshore processing and export infrastructure in the Guyana-Suriname Basin, development through a floating production storage and offloading (FPSO) unit will be the most optimal option. “Maka Central reservoirs are located at the same level as the nearby Stabroek play – around 400 feet – so it is reasonable to assume a potential of 300 million barrels of gross recoverable oil,” he said.

“Assuming there will be similar development and operating costs to Liza Phase 1, to breakeven from the estimated total costs of US$7.2bn, Maka Central will need minimum recoverable resources of 213 million barrels of oil equivalent at oil prices of US$56 per barrel,” Bosunga stated.

Block 58 comprises 1.4 million acres and offers significant potential beyond the discovery at Maka Central. Seven distinct play types, and more than 50 prospects, have been identified. However, although initial indicators are encouraging, such expectation could be premature. A comprehensive exploratory program over this large block with further drilling and testing needs to be carried out to appraise the resources and productivity of the reservoirs.

“It is far too early to know whether this new discovery by Apache and Total might eventually bring a similar positive financial impact for Suriname as the Stabroek block is expected to do for Guyana,” he pointed out.

Nonetheless, Bosunga said the initial indicators are encouraging and it is worth noticing that Apache has the ability to retain the entirety of Block 58 with no relinquishment requirements until June of 2026.

On January 7, Apache announced that it had made a significant oil discovery at the Maka Central-1 well using the drillship Noble Sam Croft. The well successfully tested for the presence of hydrocarbons in multiple stacked targets in the upper Cretaceous-aged Campanian and Santonian intervals and encountered both oil and gas condensate.