OilNOWLatest News and Information from the Oil and Gas sector in Guyana
More
FeaturedNewsRegional
Updated: December 24, 2019 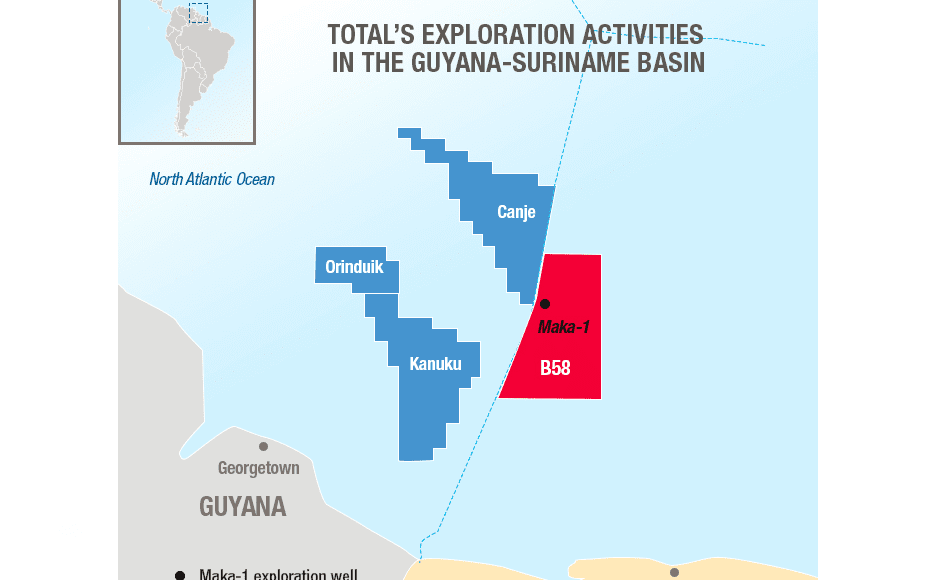 French oil company Total (TOTF.PA) said on Monday that it would pay a bonus of $100 million as part of its previously announced deal with U.S. peer Apache (APA.N) to develop a block off Suriname.

“Total is pleased with this significant entry in Suriname where Total will become the operator and bring its deepwater expertise. The new license expands our positions in the Guyana-Suriname Basin, a highly favorable petroleum province,” said Arnaud Breuillac, president of exploration & production at Total.

Under the terms of the agreement, Apache and Total will each hold a 50% working interest in Block 58, which comprises approximately 1.4 million acres in water depths ranging from less than 100 m to more than 2,100 m. Apache will operate the first three exploration wells in the block, including the Maka Central-1 well, and subsequently transfer operatorship to Total.

In exchange for a 50% working interest, Apache will receive various forms of consideration, including: $5 billion of cash carry on Apache’s first $7.5 billion of appraisal and development capital;  25% cash carry on all of Apache’s appraisal and development capital beyond the first $7.5 billion; various cash payments in conjunction with closing of the joint venture agreement and future production from joint development projects; and reimbursement of 50% of all costs incurred to date in Block 58.   Apache and Total have also agreed to bear their proportionate working interest share of costs on all future exploration wells.

“We are very pleased to team up with Apache and Staatsolie, and to become operator of this promising license where we will bring our deepwater expertise. It is indeed a unique exploration opportunity in a prolific basin,” said Patrick Pouyanné, chairman and CEO of Total.