OilNOWLatest News and Information from the Oil and Gas sector in Guyana
More
ExplorationFeaturedNewsRegional
Updated: April 12, 2021 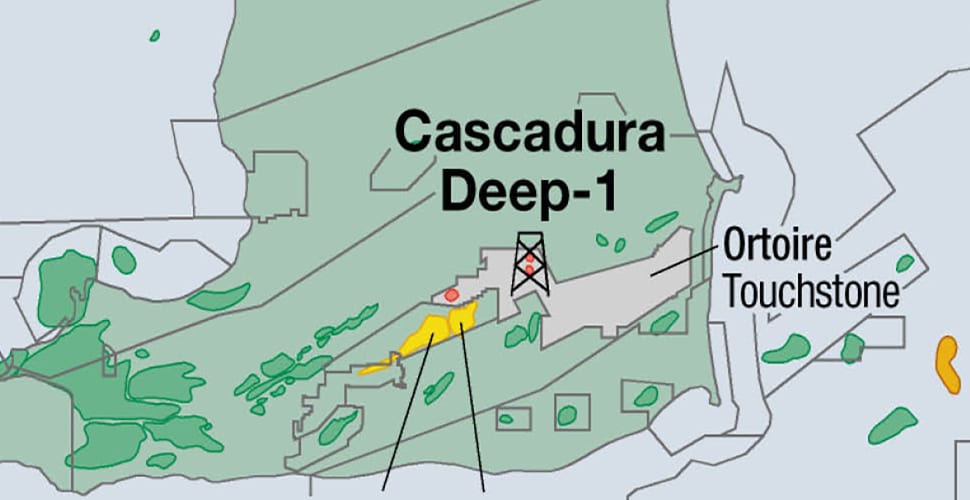 Canada-based oil and gas company Touchstone Exploration Inc. said on Monday the completion of flowback testing of the Cascadura Deep-1 well in Trinidad and Tobago confirms a liquids rich natural gas discovery. Touchstone has an 80 percent operating working interest in the well, which is located on the onshore Ortoire block. Heritage Petroleum Company Limited holds the remaining 20 percent working interest.

Paul Baay, President and Chief Executive Officer of Touchstone said the positive test results from Cascadura Deep-1 further expands the opportunity on the Ortoire block. The company now expects to have two distinct and separate sheets producing from two wells in the Cascadura structure.

“We will accelerate operations required to bring the two Cascadura wells onto production as the test results allow us to properly size surface facilities for reservoir management,” Baay said. “We are also moving forward with the required applications to establish a second Cascadura surface location, designed for up to four development wells. The test results demonstrate the clear future production opportunities for the Company.”

Cascadura Deep-1 well production testing commenced on April 8, 2021, with flow tests spanning a total of 58 hours, comprised of an initial clean-up flow period, followed by an initial shut-in period and a five-step rate test, including a 24-hour extended flow test. Well testing was conducted by an international well testing and measurement company.

The well is currently shut-in for an extended pressure build-up survey for a minimum of four weeks to identify possible formation boundaries. Touchstone will not conduct further testing of the well and intends producing the well concurrently with Cascadura-1ST1.

“We will not be conducting any up-hole testing in the well as we do not want to interrupt this interval at the risk of damaging the reservoir with water-based fluids,” he stated. “The data collected in this flow test indicates that sheet four is separate from sheet three, where production is expected from the Cascadura-1ST1 well. There remains an additional 558 feet of potential pay above the tested zone in sheet three which can be evaluated in future development wells.”

Touchstone said it has further extended the term of its Lease Operatorship Agreements with Heritage for its Coora-1, Coora-2, WD-4 and WD-8 blocks to April 30, 2021. The LOAs were originally set to expire on December 31, 2020 and were previously extended to March 31, 2021. The LOAs remain under existing terms and conditions while Heritage progresses on regulatory approvals regarding new ten-year LOAs for each property.