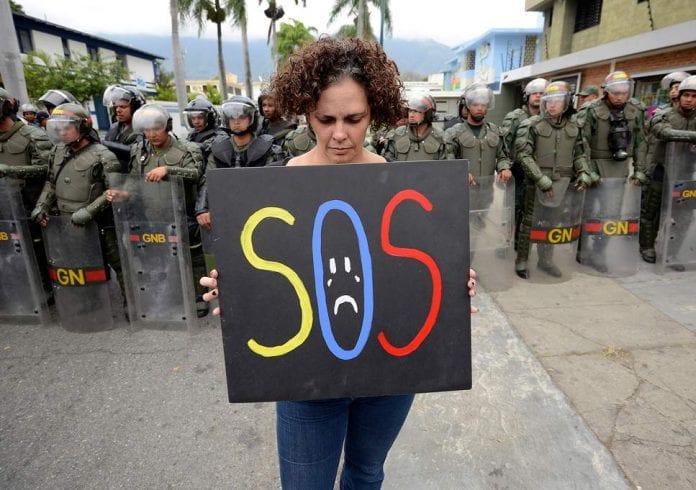 Venezuela’s slide from top of the heap to a virtual bit player in the oil market is a slow-motion car crash. Production sank progressively from 2.6 million barrels per day (b/d) a decade ago, when it was third in OPEC behind only Saudi Arabia and Iran, to 2.0 million b/d by Q3 2017. Decline since has been precipitous – today it’s just 1.1 million b/d, says Simon Flowers, in an article published on Forbes.

The market has shrugged off the loss, even with the absence of sanctioned Iranian oil. Venezuela’s heavy barrels have been largely displaced by supplies from Canada, Mexico and elsewhere.

As the US sanctions announced January 28 bite, worse lies ahead. Two factors will drive production down to 0.7 million b/d over the next six months in our latest forecasts: lack of access to the diluent needed to help the heavy crude flow; and limited availability of finance for workovers and basic maintenance on wells, The intensifying economic squeeze and external political pressure will likely lead to a new government and stabilization in 2020. Then, perhaps, recovery can begin.

The collapse of the economy has been one of the most severe (barring wars) since the fall of the Soviet Union. Six years ago, GDP per person was $14,500, placing Venezuela just behind Chile as the wealthiest economy in South America and in the top 50 globally. In the past five years, the size of the economy has roughly halved. Besides severe recession, the country is grappling with hyperinflation and a population exodus. The UN estimates that some 3 million of the country’s 31 million people have fled since 2015.

A central factor in the shriveling of the economy has been over-dependence on oil. Non-oil industries have all but vanished, their share of exports falling from around 25% in the late 1990s to less than 3% in recent years. The government borrowed heavily against rising oil revenues in the previous decade, fueling social spending. When oil prices fell in 2014, Venezuela had minimal savings and no other buffer. The result has been a shortage of dollars to pay for imports of even basic goods, never mind repaying its international creditors or maintaining oil production.

It’s a window to a dystopian future for Guyana. Venezuela’s neighbor to the east, Guyana is developing its first offshore oil and gas finds made in the past four years. There’s a growing number of them; the 11th and 12th announced last week takes resource to over 5 billion barrels of oil equivalent, most of it oil and low cost. Production could exceed 1 million b/d next decade, putting Guyana in non-OPEC’s top ten – from nowhere. Operator ExxonMobil’s plan for the Liza complex will transform the economy.

Guyana’s GDP was US$3.7 billion in 2017, but will grow by multiples. Our analysis of the upstream project assumes total investment of over US$30 billion; plateauing at US$5 billion annually in the early 2020s as the known discoveries are developed; all perhaps matched by investment down the value chain onshore. Tax revenues kick in from the mid-2020s and build up quickly to more than US$10 billion a year.

For such a small economy, the scale of development is staggering. Assuming oil production of 1 million b/d by 2030, Guyana’s output per person will be higher than any other major oil producer. A four-fold increase in the size of its economy over a decade is possible, catapulting Guyana into the high-income bracket. Azerbaijan and Equatorial Guinea are other countries in recent history that have experienced similar explosive growth, but from a lower base.

What can Guyana do to make the most of its oil and avoid the pitfalls? Kuwait and the UAE have consistently invested a portion of revenues in sovereign wealth funds. Each had built up a buffer three to four times the size of their economies to draw on when the oil price collapsed in 2014. Such a strategy helps smooth out the boom and bust, but requires a high degree of discipline. It will be tempting to spend, spend, spend.

Another clear lesson from Venezuela is not to become too dependent on a single source of revenue. Building infrastructure and raising education standards will facilitate development of other sectors. Local content and employment requirements for the oil industry can support this process.

It will be a delicate balancing act. The role of government is also central to success in setting clear energy policy, establishing firm and independent regulation, and a stable fiscal policy. These set a framework for close collaboration with international operators. The fate of Venezuela is all the incentive needed to get this right.

Simon Flowers is Chief Analyst and Chairman for Wood Mackenzie. He has over 20 years of experience in the oil, gas, utilities and mining sectors, working with the boards of many energy companies on strategic issues. His views on major industry issues are regularly sought by the media in Europe, the US and Asia. Simon graduated in geology from the University of Edinburgh, and worked for two years as a geologist in the oil industry working in the Netherlands and offshore Egypt. He is based in Edinburgh, Scotland.