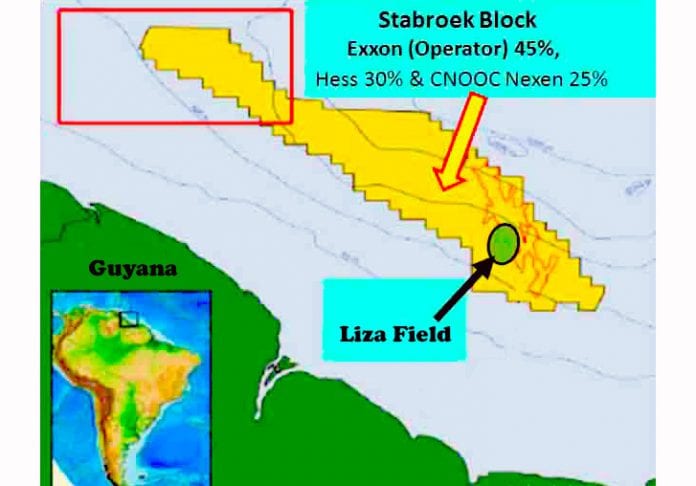 UK-based industry analyst Wood Mackenzie says Guyana has been one of the most dominant players in the oil and gas industry since 2015 with a record number of discoveries being made, most notable of which are those in the world-class Liza field.

In a report released on August 30, Wood Mack said Guyana’s Liza Complex, located in the Stabroek Block, accounts for 15% of all conventional crude found globally since 2015. “The project economics are world-class, with development returns above 30% and a full-life break-even of US$40/bbl (NPV15). Attractive fiscal terms, scale of resource, and reservoir quality – most operators would hope for two of three, but Liza offers all three,” the analyst said.

Explaining further, Wood Mack said the prolific Guyana discoveries are changing the game for ExxonMobil and its partners in the Stabroek Block; Hess and CNOOC Nexen.

“ExxonMobil has in the Liza Complex one of its five key growth pillars and the project helps to address the major’s relative lack of deepwater exposure. For Hess, Guyana growth will supplement its key Bakken position. At peak output in 2026, the project accounts for 30% of total company production. CNOOC is the leading Chinese NOC exploring offshore Latin America, with exposure to Mexico, Guyana, Argentina and Brazil. On its international portfolio, Guyana is the NOC’s second largest country in terms of value and reserves,” the report stated.

Liza’s potential could extend across the Equatorial Margin, Wood Mack said, which accounts for almost 25% of Latin America’s offshore licensed acreage. “A full range of companies is present. All the Majors (except for Eni), large independents, prominent explorers and Asian NOCs have interests in the region. With 80% exploration success rate, the Liza complex still has 20 targets to chase. The Equatorial Margin extends to Suriname, French Guyana and Northeast Brazil, where geological similarities are expected.”

ExxonMobil announced its 9th oil discovery in the Stabroek Block on August 30, at which time total recoverable reserves was already estimated to be well over 4 billion barrels of oil. The company projects that oil production in the South American country could exceed 750,000 barrels per day by 2025.