OilNOWLatest News and Information from the Oil and Gas sector in Guyana
More
FeaturedNews
Updated: December 26, 2017 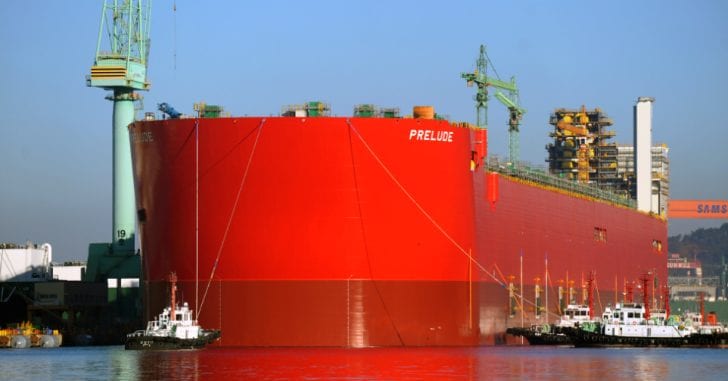 (CNBC) Displacing as much water as five aircraft carriers is just one eye-popping statistic that attempts to explain the sheer size of the world’s largest vessel.

Construction on ShellRDSA-GB‘s huge floating liquefied natural gas (FLNG) structure began in 2012 and was finished in July by Samsung’s Heavy Industries in South Korea, before being towed to Australia.

In 2018, the 488-meter long facility, also called Prelude, will begin its job of extracting and processing gas at sea. The gas is to be pumped up from below the seabed to the floating platform, where it is then cooled.

LNG ships, serving Asian customers, will then pull up alongside and fill their tanks with liquefied gas that has been chilled to -162 degrees Celsius.

Despite its ship-like appearance, the Prelude vessel is not in the strictest sense a boat as it needs to be towed to its destinations.

Its ability to produce and offload gas to large carriers removes the need for long pipelines to land-based LNG processing plants. The technology is also lauded for the structure’s ability to then be used at another remote location.

However, the increase in cheap gas because of U.S. shale technology has left some questioning the current value of an expensive off-shore facility.

In 2016, Shell itself decided not to pursue a further three FLNG projects with Samsung.

Shell, along with joint venture partners KOGAS and Impex, estimate the ship will remain at the Prelude field for as long as 25 years before it is towed to another offshore field.

A giant in numbers

Fully operational, Shell says it will harvest at least 5.3 million tons per annum (mtpa) of liquids — 3.6 mtpa of LNG, 1.3 mtpa of condensate and 0.4 mtpa of liquefied petroleum gas.

The company claimed that amount of gas would be more than the annual needs of Hong Kong.

The ship has a deck longer than four soccer fields and storage tanks that would fill 175 Olympic-sized swimming pools.

At nearly one-third of a mile long and longer than the Empire State Building, Prelude is also as wide as the wings on a Boeing 747.

At full load, it will displace more than 600,000 tons, more than six times the displacement of the USS George Washington.

More than 6,700 Horsepower thrusters are used to position the facility and 50 million liters of water will be used every hour for cooling the LNG.

Shell has never disclosed how much the vessel will cost, but industry analysts told Reuters that its price would sit between $10.8 billion and $12.6 billion.