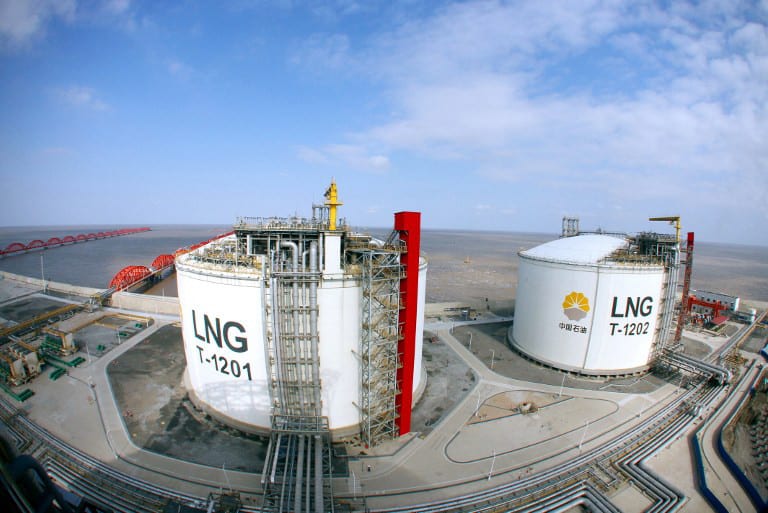 (Bloomberg) China is ahead of schedule on its way to becoming the second-largest importer of liquefied natural gas.

The nation, already the world’s top energy user, is on the verge of passing South Korea to become the No. 2 buyer of LNG behind Japan, as environmental measures and winter heating needs boost demand.

Tankers with total capacity of 33.6 million metric tons have visited China this year, just 1.7 million below South Korea’s total, according to vessel-tracking data compiled by Bloomberg. The gap was more than 24 million tons in 2011.

“The battle for 2017 No. 2 importer is going to be close, but China will likely just make it,” Kerry-Anne Shanks, a Singapore-based analyst for Wood Mackenzie Ltd., said by email. “This didn’t look that likely for most of the year, as South Korean imports were so strong. But since July, China has been significantly higher than South Korea every month.”

China’s emergence as an LNG power is another sign that it’s entering what Sanford C. Bernstein & Co. analysts called its “golden age of gas.” Government efforts to reduce smog by promoting gas over coal at industrial sites have driven a 19% increase in demand through October. That’s outpaced increases in production, requiring more imports and creating shortages in some parts of the country as winter heating demand kicks in.

China’s buying binge is coming earlier than some analysts expected. Bloomberg New Energy Finance in September forecast that it would take China until 2019 to surpass South Korea. Now the two countries are seen as neck and neck this year, BNEF analyst Maggie Kuang said. They both still lag behind Japan, which imports more than China and South Korea combined after LNG imports rose following the 2011 Fukushima disaster that shuttered most of the nation’s nuclear plants.

South Korea bought almost 33.5 million tons of LNG last year, compared with 26.2 million by China, according to their separate customs data. South Korea has imported about 30 million tons during the first 10 months of this year, with China at 29.2 million, the official data show.

At the beginning of 2017, China seemed likely to grab second place by year-end, Shanks said. But by mid-year that looked less likely because South Korea was buying more LNG than expected. Some of that purchasing has gone into building up stockpiles in South Korea, Shanks said, while in China the imports are going straight to use.

One example of that is the LNG tanker Cool Explorer, which arrived in South Korea’s Gwangyang terminal on Nov. 29 and loaded up with a cargo of LNG that had previously been unloaded into a storage tank there. That ship docked at CNOOC Group’s LNG terminal in Hainan on Wednesday, ready to add to China’s import total.

CNOOC wants China to speed up reform of fuel pricing