OilNOWLatest News and Information from the Oil and Gas sector in Guyana
More
News
Updated: May 12, 2018 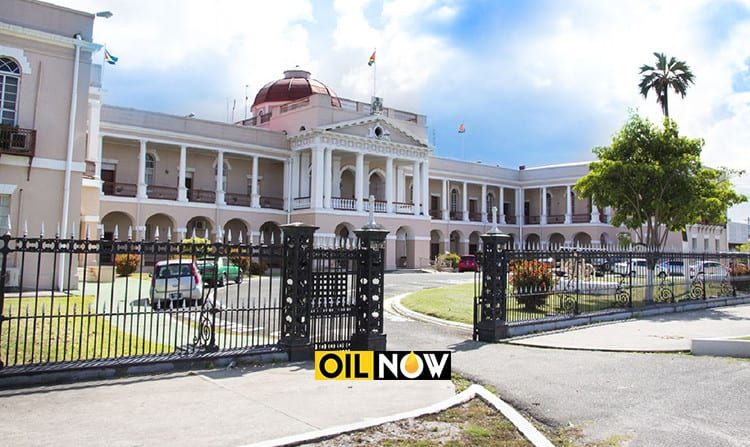 Guyana’s 65 Member National Assembly on Friday unanimously voted to approve some US$4M for the State’s legal defence at the International Court of Justice (ICJ) in the Hague—monies to be sourced from a US$18M signing bonus paid to Guyana by US oil major ExxonMobil in 2016.

The request was documented in a Financial #2, Paper submitted by the South American nation’s Ministry of Finance, in order to have the money be made available for the Ministry of Foreign Affairs.

Present in the Chambers for the vote was ExxonMobil’s country manager Rod Henson, who heard Opposition Leader Bharrat Jagdeo, pledge his party’s support in the Border controversy case with neighbouring Venezuela.

Mr. Jagdeo, during scrutiny of the expenditure breakdown provided by the Finance Minister told Members of Parliament, (MPs), “….nothing that we say here must be interpreted as not supportive of our case at ICJ and full solidarity with Government in pursuing that case.”

Guyanese Minister of Foreign Affairs, Carl Greenidge, providing information in response to the opposition interrogations said, “the monies will be spent in fees claimed by the lawyers based upon the hours of work they put in…Money will be spent to reimburse them for expenses other than their professional fees,” he said too, making reference to travel and the acquisition of documentation as examples.

The Foreign Affairs Minister noted too he would be unable to provide specifics on the full team of lawyers for the case since assembling the team is an ongoing process.

“At moment it is not quite complete, as the case go through its various stages lawyers or firms will be brought into the team.”

Mr. Greenidge told Guyanese legislators, the amount requested by his Ministry represents an estimate of what the Ministry forecasts would be required for 2018—a process that will be repeated in subsequent years as the case progresses.

“A lot of this will depend on what the other side does,” Mr. Greenidge said in reference to Venezuela and its approach to the case at the ICJ.