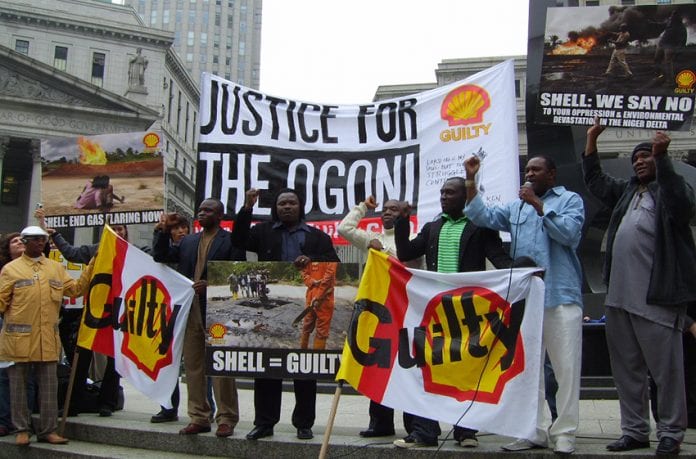 (BBC) Oil giant Shell should be investigated for alleged complicity in” horrific crimes” committed by the military in Nigeria in the 1990s, Amnesty International has said.

Shell encouraged a crackdown, which led to killings and the burning of villages in the oil-producing Ogoniland region, the rights group added.

The Anglo-Dutch oil firm said the allegations were “without merit”.

The region was hit by protests over oil pollution and poverty in the 1990s.

It led to a massive crackdown by Nigeria’s then-military regime.

In a statement, Shell Nigeria said it had always denied involvement in the executions.

“We were shocked and saddened when we heard the news of the executions. Shell appealed to the Nigerian government to grant clemency. To our deep regret, that appeal, and the appeals made by many others within and outside Nigeria, went unheard,” it said.

Amnesty said it had studied thousands of internal documents of the company and witness statements which pointed to the need for the UK, the Netherlands and Nigeria to launch an investigation into the firm’s alleged complicity in human rights abuses in Ogoniland.

“The evidence we have reviewed shows that Shell repeatedly encouraged the Nigerian military to deal with community protests, even when it knew the horrors this would lead to – unlawful killings, rape, torture [and] the burning of villages,” the rights group said in a statement.

“In the midst of this brutal crackdown Shell even provided the military with material support, including transport, and in at least one instance paid a military commander notorious for human rights violations. That it has never answered for this is an outrage,” it added.

The firm did not collude with the authorities to suppress unrest and in no way encouraged any act of violence in Nigeria, it said.

“We believe that the evidence will show clearly that Shell was not responsible for these tragic events,” the firm added.

Shell is the oldest multinational energy company in Nigeria, and is involved in joint ventures with the government.

Its investment and those of other firms have long been dogged by controversy.

In 2011, a UN report said the Ogoniland region could take 30 years to recover fully from the damage caused by years of oil spill.

Communities faced a severe health risk, with some families drinking water with high levels of carcinogens, it said.

Communities say the spills have had a devastating effect on farming and fishing, worsening poverty.