OilNOWLatest News and Information from the Oil and Gas sector in Guyana
More
FeaturedNewsRegional
Updated: November 29, 2017 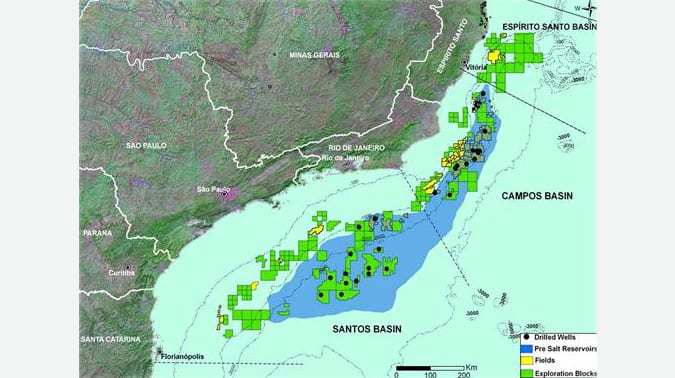 The 14th Bidding Round of blocks for exploration and production of oil and natural gas, held on September 27 by Brazil’s National Agency of Petroleum, Natural Gas and Biofuels (ANP), marked the reestablishment of the sector in the South American country, with the largest total signature bonus in history of approximately US$1.2B.

A total of 287 exploration blocks were auctioned across nine basins with an estimated total of 50 billion bbl in place, both offshore and onshore.

The joint venture of Petrobras and ExxonMobil signed the largest bonus of US$701 million (R$2.24 billion) for a block in the Campos basin.

Companies acquired 37 blocks at an area of 25,011sq km for exploration and production with a projected investment of $264.6 million (R$845 million). The offshore acreage included blocks in Pelotas, Santos, Espírito Santo, Sergipe-Alagoas, and the Campos basins.

The success of the auction reflects the regulatory changes made by the Brazilian government, which have made the business environment more attractive to companies of different sizes.

In total, 20 companies from eight countries participated in the bid. Seventeen of them acquired blocks, of which 10 are Brazilian and seven are from other countries. The signing of contracts is expected to occur until January 31, 2018.

The success of the auction reflects the regulatory changes made by the Brazilian government, which have made the business environment more attractive to companies of different sizes, Brazil’s National Petroleum Agency (ANP) said.

ANP said it continues its strategy to expand exploration areas in the country and attract companies of different profiles.