Guyana, get ready for a wild ride! 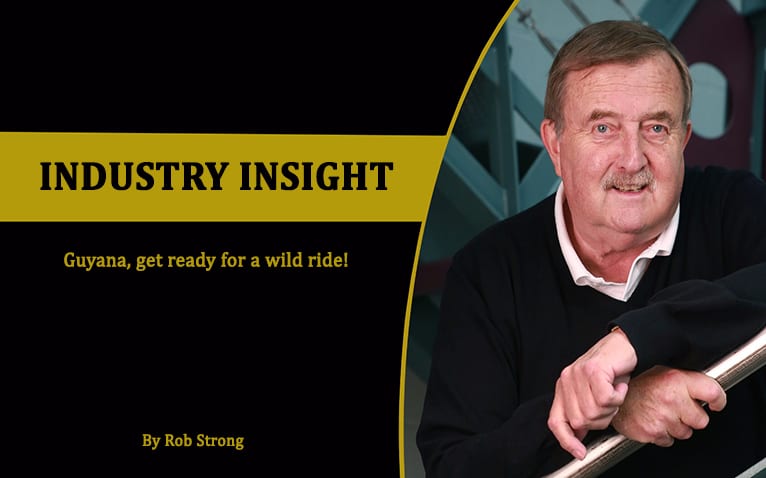 This is the first of several columns that I will be contributing to OilNOW. Allow me to introduce myself.

Very briefly, my 40-year background in this industry is comprised primarily of positions in the service and supply facet of the offshore oil and gas business, as well as many years involvement in various industry associations. One of the highlights was my service as a long-time committee, board and executive member of the Newfoundland and Labrador Oil and Gas Industries Association (NOIA).

In 2002, I was awarded the NOIA Outstanding Contribution Award on the occasion of the association’s silver anniversary celebrations, in recognition of my lasting contribution to the establishment and growth of Newfoundland and Labrador’s oil and gas industry.

Most recently, I was asked to assist in the establishment of the Guyana Oil and Gas Association (GOGA). I was intimately involved in GOGA’s first Annual Oil and Gas Conference held in March 2017.

My love affair with the oil and gas industry started almost 40 years ago coincident with the discovery of oil at Exxon’s (formerly Mobil’s) Hibernia oil field situated approximately 200 miles off the coast of the Province of Newfoundland and Labrador in the prolific Jeanne d’Arc Basin.

At that stage, the economy in Newfoundland and Labrador was a mixed economy with fishing being the predominant industry. Along with the fishery, Newfoundland and Labrador also had a significant mining industry, along with pulp and paper manufacturing.  But when oil was discovered some 200 miles off the coast, the economic climate looked as though it would change and so it did – dramatically!

Hibernia really kick started the oil and gas industry in Newfoundland. Exxon was the operator on behalf of its partners Gulf Canada, Petro-Canada and Chevron and, subsequently undertook the development of the field which, as of this year, produced its billionth barrel.  And, this was from a field which was forecasted to have 653 million barrels recoverable. The technology utilized by Exxon and its partners has largely been responsible for this massive increase in recoverable and the improvement in technology still continues.  Interestingly enough, all of us involved in the Newfoundland and Labrador industry celebrated the 20th anniversary of first oil a few days ago.

The Canada Newfoundland and Labrador Offshore Petroleum Board (CNLOPB) now estimates that the field will continue to grow and total production is estimated at 1.6 billion barrels.

However, it has been a long haul to reach the stage where we are today. A review of the well histories of offshore Newfoundland and Labrador indicates that the first well was drilled and completed on August 10, 1966.  But as my friend Jim Keating, Vice-President of Newfoundland’s oil and gas company Nalcor, reminded me recently, “We had 21 wells before our first oil show. It was not in commercial quantities.  Not until Hibernia P-16 in 1979 which was our 60th well did we have our first commercial one.  In the first 60 wells, we had 10 “shows” mostly gas in Labrador.”

In the case of Guyana, the Eagle 1 well drilled in 2012 by CGX had a budget of $55 million.  Similar to early wells drilled in Newfoundland, the Eagle 1 encountered oil but not in commercial quantities. My message here to countries bordering the Guyanese/Suriname Basin is to “be patient.”

I raise this in the context of the recent news that a well drilled offshore Suriname was deemed to be non-commercial. I would certainly not let the fact that there have been a couple dry wells drilled in the Guyana/Suriname Basin discourage any interest there might be. Along with many others including the United States Geological Survey, I am a firm believer that the Guyana/Suriname Basin is indeed a prolific basin which contains numerous opportunities for further development.

As it has turned out, Hibernia was and continues to be the catalyst for the oil and gas industry in Newfoundland and Labrador. Subsequent to that discovery, we have had three other major field developments off our coasts. Two of them are being produced via the same technology that is contemplated by Exxon for Lisa Phase 1 that being a subsea development produced to an FPSO.

For those Guyanese who have visited Newfoundland and Labrador, they most likely found the oil and gas industry to be very intimidating, just as we found it to be in 1979. Having said that, Newfoundland had a marine-based industry which was extremely beneficial in understanding the marine aspects of offshore oil and gas development. However, and this is a very strong however, we really did not have the understanding that was required to undertake a major component of developing production systems that were required to produce oil from our fields.

I am hoping that individuals with direct influence in the oil and gas sector in Guyana and Suriname can relate to the challenges that we faced in the early days of oil and gas developments on the east coast of Canada and rise to the challenge. Newfoundland and Labrador did it and I see no reason why, with careful planning and education, Guyana cannot reap the same level of benefits that we have achieved here.

But, let me say, and this comes from five visits to Guyana in the last year, that there is much work to be done. Below I am listing some of the key issues that I think need attention.

Look to future columns as I address these.

During my first visits to Guyana, I have used the expression “Elephants Don’t Travel Alone” and this quote was used in media reports. Since that initial quote, Guyana has seen discoveries at Liza 2, Liza 3, Payara, Snoek and now Turbot.

Guyana, get ready for a wild ride!