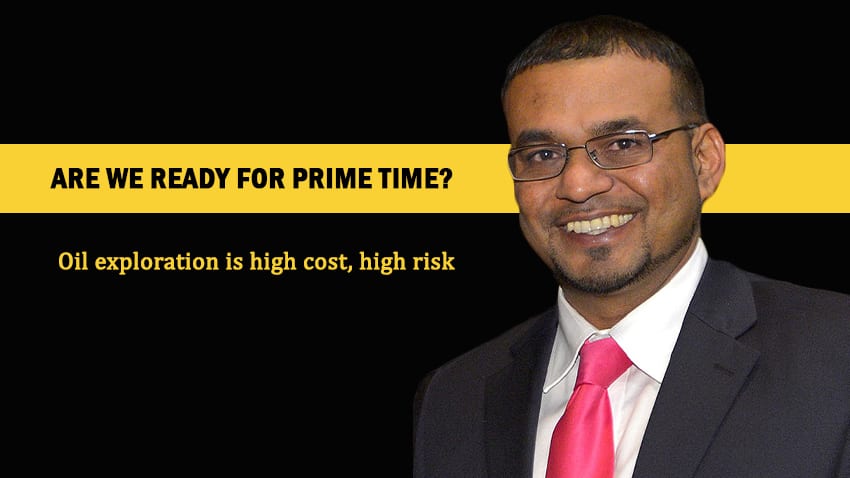 One of the riskiest businesses is oil and gas (O&G) exploration. The risk climbs exponentially if it is taking place in a virgin basin, not yet proven its commercial potential. O&G projects are by nature risky ventures due to their complex nature, potential environmental impact and high operational costs. These risks balloons for O&G exploration ventures in new frontiers. Guyana’s offshore, up until early 2015, was considered unexplored and under-explored.

I stress this point as it is ignored in the conversations on ExxonMobil’s and other future Production Sharing Agreements (PSA) and obligations of the companies to the country’s coffers and their social responsibilities.  Any discourse that does not recognize this inherent huge risk would be incomplete.  It would also create unreasonable expectations on the part of various stakeholders.  Let me be clear, this is not to argue against the fairest of returns in royalty, taxes, corporate social responsibility and a stream of indirect benefits to the population and the country, which owns the hydrocarbon resources.

To give a picture of the risks involved, let me reflect briefly on the 2012 oil well drilling campaign in our offshore. It was the same year the United States Geological Survey ranked Guyana as having the most attractive under-explored basin in the world.

First, the Eagle 1 well;  a 100% CGX undertaking having received its Petroleum Agreement (PA) and Petroleum Prospecting Licence (PPL). This well was estimated at 60 days of drilling but due to weather and mechanical delays the drilling period had to be extended by another 30 days. The original budget was US$55M and it went over budget by about US$22M.  The Eagle 1 encountered oil but not in commercial quantity.

Second, the Jaguar 1 well; a consortium of Repsol, YPF Guyana, CGX and Tullow, which having received its PPL, launched the Jagauar-1 well drilling. This was to be the deepest well drilled in the Guyana-Suriname Basin at a projected depth of 6,500 meters over 180 days. Drilling started in February 2012 and by early July 2012, having reached 4,876 meters, operations had to be abandoned. The well was plugged without reaching the primary objective.  This was done primarily due to safety concerns as the Jaguar-1 was ‘high pressure, high temperature, similar to BP Gulf of Mexico operations which led to the Deep Horizon oil spill of 2010. The estimated bill of this other unsuccessful exploration venture was close to US$180M.

Both CGX and Repsol, after their 2012 campaign, went through a period of organizational, ownership and financial turmoil, partly contributed by the unsuccessful and costly oil well drilling forays in Guyana’s offshore.

Then, in 2013, things got riskier for oil exploration companies operating in our offshore as Venezuela’s thirst for our hydrocarbon grew. In October 2013, the Venezuelan navy seized, in Guyana’s territorial waters, the Teknik Perdana, an oil exploration ship contracted by the US company Anadarko. The company had in the previous year been granted a PPL. I vividly recall receiving that unsettling phone call on October 11, 2013, while in-transit at Amsterdam Airport, advising me of the illegal, provocative action by Venezuela. Not only was this oil exploration company’s investment now jeopardized, but future oil exploration activities hit a major obstacle thereby escalating risks and costs for the companies and their investors.

The courage and determination of Esso Exploration and Production Guyana Limited (EEPGL), the local affiliate of ExxonMobil, must be commended in going forward with its planned exploration campaign. Faced not only with the existing risks but the declining global oil price, the company pressed on, leading to the May 2015 “world class discovery” at Liza 1 in the Stabroek Block.   The exploration company’s subsequent discoveries too did not come at a small price tag.

And the Guyana-Suriname basin continue to prove challenging and highly risky as recent as last Thursday (October 26, 2017), when Tullow and its partners came up with no commercial quantity of oil while drilling in Suriname’s offshore block 54 http://www.tullowoil.com/media/press-releases/araku-1-well-update.

It is important to note that even before getting to the point of drilling an oil exploration well, there are other costly investments which will have to be undertaken including purchasing of data and carrying out extensive 3D seismic surveys.

Even after ‘world class discoveries’, there are still huge risks beyond the control of the companies and regulators, setting aside the obvious volatile oil price and environmental vulnerabilities. Companies still have to address the ‘recovery factor’ as only a percentage the amount of ‘oil in place’ can be brought to the surface given what geophysicists call ‘reservoir characteristics and limitations in petroleum production technology.’

In our situation, exploration investments were/are not funded by the people of Guyana other than the incentives granted in the PAs and PSAs. And what is offered is consistent with the existing global oil exploration industry packages. In fact, several countries are further sweetening their concessions and incentives to attract more oil companies. Just this week, the Indian government says it will announce new policies to help global companies to participate in its oil and gas sector. India, which imports 80% of its oil, wants to carryout more exploration and boost production.

Demanding our fair and just share, we must. But, at the same time, we must be cognizant of the risks and work for the long-term viability of an O&G sector thus enabling us for prime time as a serious oil player way beyond 2020.