Voices of reason, hope need to speak up on O&G 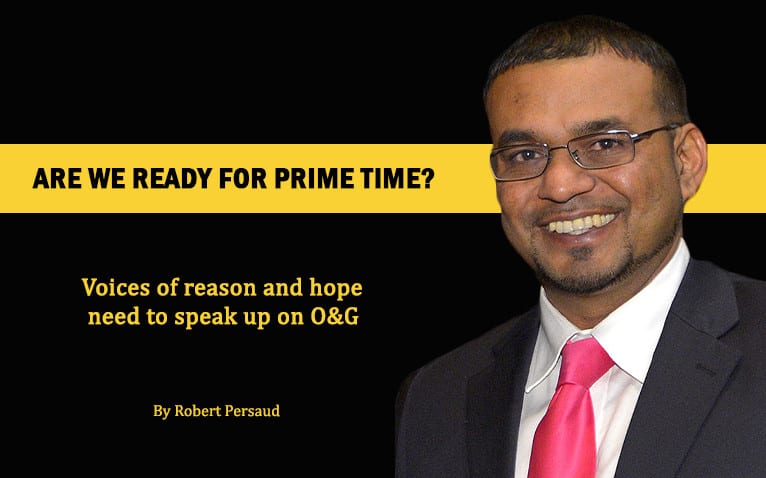 Is the public discourse on Guyana’s emerging Oil and Gas (O&G) sector becoming more informed and objective? It’s a question all involved stakeholders  (government, political opposition, civil society, oil companies, contractors, media, observers, etc.) should ask. If the answer is no, then we all have a duty to contribute to a more educated and, hopefully, objective conversation.

The developments in O&G are fast moving and stakeholders’ grasp and understanding of this new sector must also keep up at the same pace with an appreciative level of depth.

And there were very significant occurrences in the last six weeks alone including:

For some, especially those experiencing uncertainty having being displaced by the on-going upheaval in the sugar industry, these could have little or no consequence on their existence. While one empathizes with such feelings, these can, directly and indirectly, offer some ray of hope in the medium to long-term amelioration of their economic and social woes.

But for some, especially those who populate space in the print and social media, there is much to objectively review and comment on. Day after day, I read the sickening drumbeat against everyone connected with O&G development and how Guyanese were outsmarted and are being ripped off. The discovery of oil in Guyana has produced many instant oil experts who are like the proverbial big fish in the small pond.

I am sure it begs the question: do some believe the discovery of oil was the worst thing to have happened for Guyana? But then why should the progress and potential opportunities be blighted by a few with narrow agendas? Is it that every time we have an opportunity to move the country forward, we must try to stab ourselves?

In the current atmosphere where there is an overdrive effort to fertilise fear, dissonance and suspicions about the impending O&G sector, the silent majority must let their voices be heard too.

How many of these voices have acknowledged and shown some level of appreciation for the bold decisions by ExxonMobil to undertake a high-risk, high-investment exploration venture and that of CGX, Repsol and Tullow, earlier. We could ask the critics if they would have come up with the hundreds of millions of U.S. dollars to exploit a dormant resource that Venezuela claims is theirs and without confirmation of the commercial reservoirs in our off-shore basin. Who would bear that risk? I make no apologies for ExxonMobil and other companies; their first obligation is to their shareholders. They are not in the altruism business. Our role must be to get the best deal, as there is no ideal deal in business or in any other realm of negotiations

Where are the voices of reason on how we embrace and make full use of an oil and gas sector, especially the direct derived benefits that will flow after March 2020?

Yes things aren’t perfect nor are they clinically sterilized. And even as we seek to correct and improve what was served in this new, and very unknown sector to many, we also need voices to convey the message of optimism about the future of the country; a place challenged and plagued by historical politics dominated by fear and mistrust.

We need the voices to now stand up and point to the Guyana of tomorrow, which can be bright, strong and an oasis of prosperity for all of its people.

Are these voices allowing themselves to be muzzled by the small coterie of pundits given disproportionate access to the media and other means of echoing their message of distrust and claims of wrongdoing here, there and everywhere?

I recall this was the default mode of the same clique and others when the PPP/C government pursued new undertakings and ventures to transform the country. Must this be our ONLY posture, a feeling of always being cheated?

Expose weaknesses and the proven (not imagined) wrongs, but at the same time appreciate progress, commend those who took risks and made bold decisions as Janet Jagan did in 1999 when she issued the original exploration and production license to ExxonMobil and the subsequent activities by the previous and current governments and investors.

Hopefully, after this week’s international petroleum conference, promised action by the government and companies on greater stakeholder involvement and awareness, we will see a more tempered, realistic and Guyana-focused discourse.

There are many forward-looking issues concerning the oil and gas sector we have not set our sights on as people, as yet.  Others are keenly preparing and encroaching as we squabble and journey to this new sector seeming to use mainly the rear view mirror. It’s time the third-generation thinking be cultivated and prevail in the O&G sector!